Death’s Parade and Sansar Team Up 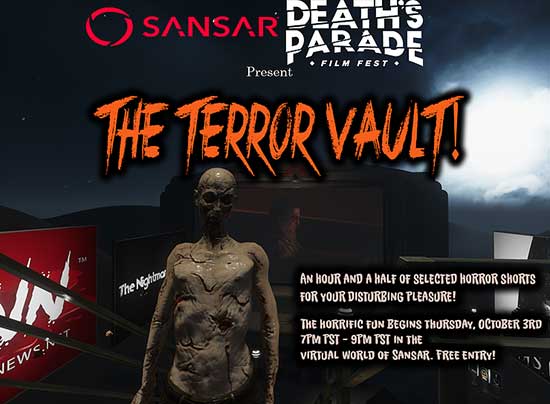 Halloween is coming! Halloween is coming! The Death’s Parade Film Fest has news to share as they shamble closer to October 5th. First off, if you haven’t looked over the first wave of selections do so now. They are preparing the rest of the selections and will have the full program announcement in August. Their friends at Reel Nightmare Films are offering a FREE one-month access to their streaming platform service BingeHorror for the first 50 ticket purchasers only. Once this number has been reached the offer is over. You’ll find a ton of quality horror content at BingeHorror so they recommend jumping on this deal!

Due to the number of high-quality submissions the Death’s Parade Film Fest will be holding a virtual festival called Terror Vault! October 3rd from 7PM – 9PM PST in Sansar, two days before festival at the Towne 3 Cinemas in San Jose. So what is Sansar, you say? In a nutshell, Sansar enables user-created 3D spaces where people can create and share interactive social experiences like comedy shows and film festivals, create and play games, have conversations in VR and much more. The Death’s Parade Film Fest is proud to be the first virtual horror film fest!

The view inside the theater is spectacular. You won’t need a virtual headset to enjoy the festivities, but the headset will enhance the experience. Logging into Sansar is made simple and with ease. The folks at Linden Lab want to get you into the world as effortlessly and painlessly as possible you can enjoy the amazing creative spaces other residents have built. You’ll be able to see the big screen from any angle, or full screen based on your viewing preference. Zoom in as close as you like.

The films will stream via 1080p through a private Youtube channel, controlled by the festival host. Like any other film festival you need to drive/walk/run to, Terror Vault! requires login to Sansar enter the theater. Sansar was built to leverage the emerging virtual reality technologies, but the view from a desktop is good too. Terror Vault! is an exclusive one night event, so if you miss the screenings on October 3rd you should have been there! 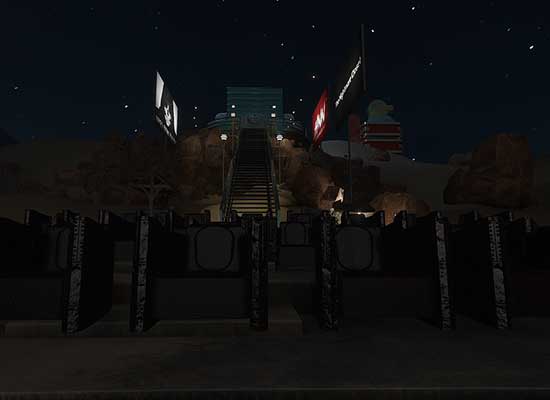 The theater is decked out in Halloween affair, and they plan to announce the selections soon. The event will run for two hours and will be stuffed to the brim with as many horrific selections as possible. DPFF wishes to thank the good folks at HorrorNews Net and The NightmareCloset for sponsoring Terror Vault! It’s going to be crazy!