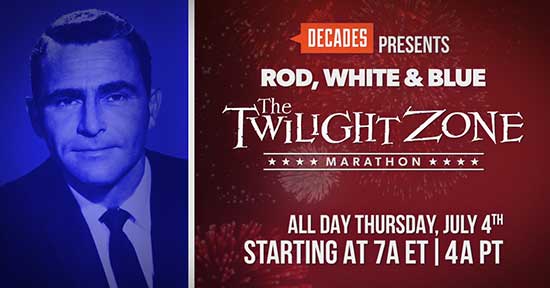 DECADES TV Network invites viewers to “cross over into the Twilight Zone” this 4th of July with a special marathon holiday presentation of Rod, White & Blue: A Twilight Zone Celebration.

Starting Thursday, July 4 at 7am ET, fans of the landmark anthology TV series can binge 42 iconic episodes back-to-back through Friday, July 5 at 7am ET, each presented on-air with fun facts and trivia about the series. The DECADES marathon will feature both the half-hour and hour-long episodes of the series, including fan favorites Nightmare at 20,000 Feet, The Masks, The Living Doll, The Eye of the Beholder, Time Enough at Last and The Monsters are Due on Maple Street.  (Complete DECADES marathon episode list here).

Created and hosted by the legendary Rod Serling, The Twilight Zone originally aired on CBS from 1959-1964, and forever changed the television landscape with its trademark blend of science fiction, horror and fantasy narratives. Each episode featured a moral or enexpected plot twist, and many aimed to inform viewers on the social causes and issues that dominated the 1960s. Since the series ended more than 50 years ago, its signature brand of storytelling continues to resonate with television audiences today. The series was revived in 1985, 2002 and, most recently, 2019 under the vision of Academy Award winner Jordan Peele.

2019 marks the second year that DECADES will feature Rod, White and Blue: A Twilight Zone Celebration as a 4th of July marathon event, having debuted in 2018 to positive audience response and excitement.

Viewers can see our complete network schedule and find out where to watch by visiting www.decades.com.