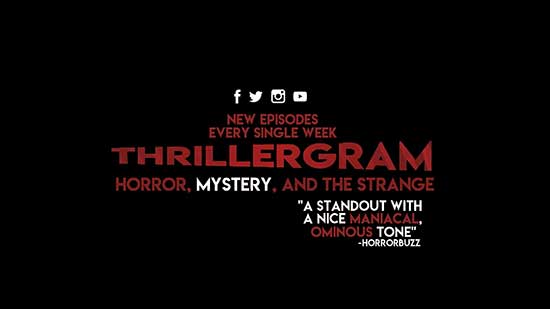 ThrillerGram is a new podcast from Vaughn-Michael Pictures, that is done in the style of an old radio drama from the 1950’s, with a similar tone to “Twilight Zone”, but with more horror forward story telling.

In each 12-15-minute episode; the show’s Narrator, Floyd Ferguson, takes the audience back into the world of the 1920’s to 1960’s, where he sets the stage for stories of Murder, Supernatural Creatures, Mysteries, Urban Legends, and other “Things” from beyond. The show first “aired” on Friday, May 24th with the premiere episode of “The Face in the Window”, an urban legend about a man who stalks two teenage girls on a rainy night in a small town of anywhere USA. New episodes have come out since, featuring “Slenderman”, Stephen King’s short story “Strawberry Spring”, and the show’s most recent Father’s Day episode, “Buddy Heart”.

ThrillerGram can be described as a cinematic experience for your ears. Each episode includes clear vocal performances, cutting edge surround sound techniques (giving the effect that the actors are moving around the room), sound effects, and a chilling score by composer Rene Gijzemijter.

As the show continues to grow, ThrillerGram is looking to bring on other named talent, to continue releasing quality content for the show’s listeners. ThrillerGram is created by Kohl V. Bladen (Writer/Director/Executive Producer), Isaac Robinson-Smith (Technical Producer), and Rene Gijzemijter (Composer/Sound Designer). The production is released through Vaughn-Michael Pictures, an independent horror film and entertainment company.