“An award-winning new film about a haunted road in New Jersey has been picked up for distribution by Midnight Releasing, who are targeting a summer theatrical bow.

In the film, scripted by Derek Ross Mackay, a widowed fire fighter seeks closure after his wife goes missing on an actual haunted road in rural New Jersey but must unlock the roads secret if he wants to get out alive.

The 10-city theatrical (cities to be announced) and PVOD release of Clinton Road begins June 14.”

Hi Erin, Tell us about “Clinton Road” and how you got involved with the film and why did you decide to take on the role? You did a great job in the film.

Erin- Oh thank you. It is so nice to hear good feedback. We got a not so great review the other day and I was like oh man, so I appreciate that. Thank you. But, we’ve gotten more good than bad.  It is a really cool project. I grew up in New Jersey but I never heard of Clinton Road. I met Vincent Young and he introduced me to Steve Stanulis who directed “Clinton Road” and Steve sent me the script and I thought it was really cool that it’s filmed in New Jersey. Then, I started to do some research and just kind of figuring out what the whole thing is about. I was even reading today on Weird New Jersey that there are just so many cool scary little things about the road. I think we pretty much covered pretty much all the crazy things in the movie.

Erin- We filmed there so a lot of my stuff was a little bit outside of the actual area it-self. Even though it felt scary and you are in the woods, it’s scary no matter what but I felt freaked out when we were filming by the road. I only had one day on the actual road. It is so spooky driving up and there is nothing. There are no lights and it is just woods. When we were on it filming, the generators kept going down for no reason and there was a spooky energy like something was there for sure.

That is creepy but it also sounds fun but still creepy. What was it like working with Steve Stanulis and Richard Grieco?

Erin- It was my first time working with him. It was an easy set. It was easy to get into what we had to do because I feel like we were all just kind of freaked out on the actual road. We did one day in a club and that was scary but just talking about what was going to happen. We had Ice-T come in and tell us his experience with the road. When he was telling his story we were all getting freaked out and anticipating what the next day would be filming on the road. But, they were super easy to work with. I love Steve and I worked with him again in October on a film called, “The Fifth Borough” and I am going to work with him again next month on a film called, “Chronicles of a Serial Killer.” Richard was amazing as well. We had a good comradery on-set.

I thought you guys did such a good job and it felt like everybody knew each other forever. It was a great film.

Erin- Yes, it totally felt like that. I was really excited to meet Ace Young too and I watched “American Idol” like everybody else. It was like having a brother. I feel like he became a brother. He was amazing to work with and he was helping out everywhere on-set. We all love each. We all kind of became a big family.

That is good though. When you are watching “Clinton Road” it does seem like you guys have known each other forever and that makes a difference.

I am so excited too. What do you want to say to the fans and audiences that will be watching “Clinton Road?”

Erin- I just really hope that they like the movie. I hope that people that knew about Clinton Road prior, I hope that we did the movie justice and I hope we covered everything.

Did you grow up watching Horror movies because you have been in a few really cool horror films? You always do a great job.

Erin- Thank you.  I always watched horror movies as a kid. There were a lot of gory horror films that I probably shouldn’t have been watching. I always loved “The Shining.” I love horror movies but I get really scared watching them. I have always been a really big fan.

Thank you so much Erin. It was an honor to speak you and have a great rest of the day and Happy Memorial Day.

Erin- Thank you. I really appreciate it. That’s really sweet of you.

Keep going, people are going to discourage you but keep going – Erin O’Brien 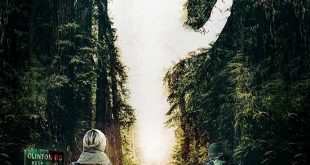