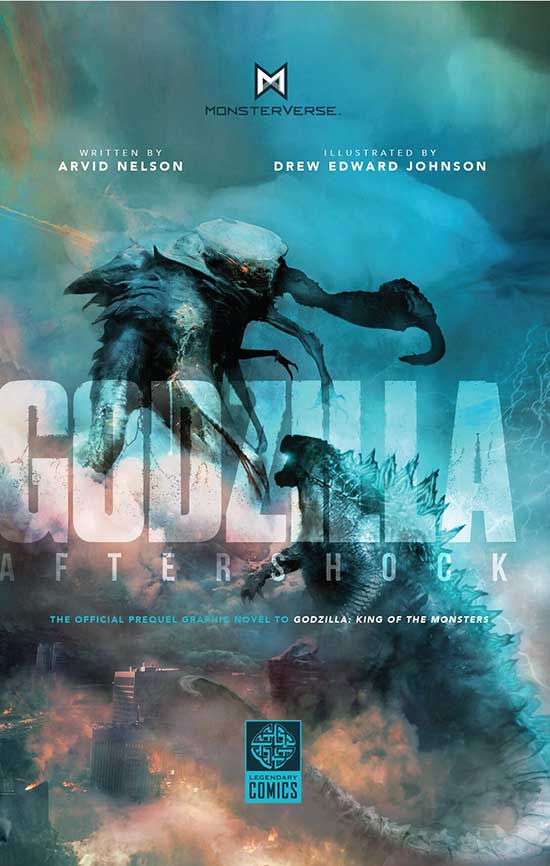 Fans eagerly awaiting Warner Bros. Pictures and Legendary Pictures’ summer’s big-screen blockbuster Godzilla: King of the Monsters, set to hit theaters worldwide on May 31, can get a sneak peek at the monstrous action with Legendary Comics’ thrilling companion graphic novel GODZILLA: AFTERSHOCK, now on sale in comic stores and online. Continuing the story of 2014’s Godzilla after the catastrophic events in San Francisco, the King of the Monsters finds himself once again threatened as a terrifying new foe rises from the depths of the earth, unleashing a series of devastating earthquakes and driven by an unstoppable primal instinct that will test the King of Monsters like never before. Follow Facebook.com/LegendaryComics for the latest news and updates.

“Part of the fun of working on a Godzilla project is that its massive scale demands that it be a collaboration with talented artists and AFTERSHOCK is no exception,” said Godzilla: King of the Monsters director Michael Dougherty. “Arvid Nelson and Drew Edward Johnson have created a story that is just as epic and compelling as Godzilla’s big screen adventures. So much so that it sometimes feels like you’re flipping through the storyboards of a movie just waiting to be shot.”

“Arvid and Drew have created a riveting prequel that adds to the Monsterverse while acting as a story bridge between the two Godzilla films,” said Robert Napton, Senior Vice President of Legendary Comics.

Written by Arvid Nelson, with art by Drew Edward Johnson, Godzilla: Aftershock introduces characters from the upcoming movie and invites readers to delve further into the activities of cryptozoological agency Monarch. The brilliant and driven Monarch operative Dr. Emma Russell races to stop the threat as clues emerge to reveal a terrible secret—a tragedy, of apocalyptic proportions from the distant past that changed the course of human history, is returning to threaten it once more. A shadowy figure stalks Emma’s every move as she travels the globe to uncover secrets, while Godzilla clashes in an ancient rivalry as old as the Earth itself.