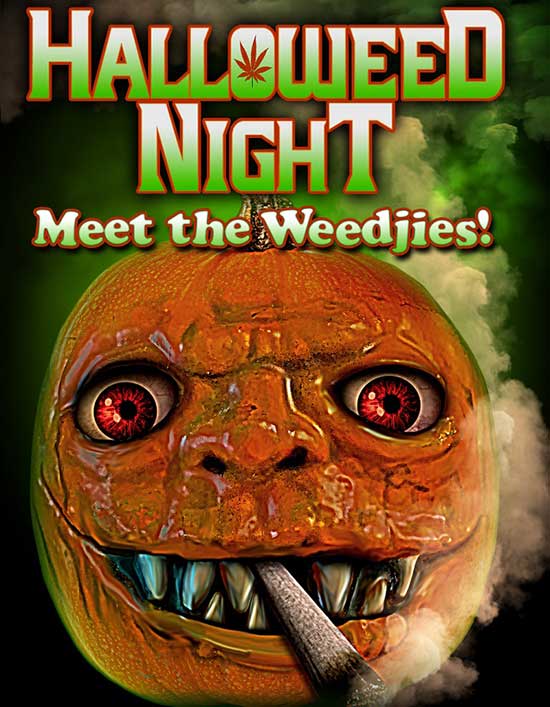 Full Moon’s most ambitious project to date, DEADLY TEN is now live and in the early stages of production on its first feature, director Danny Draven’s HALLOWEED NIGHT: MEET THE WEEDJIES. The horror/comedy will be shot in Las Vegas early June and is an unholy amalgam of Charles Band’s classic ’80s cult film GHOULIES with Full Moon’s popular weed-centric EVIL BONG movies.

The studio is pulling out all the stops for HALLOWEED NIGHT and the fun has already begun, with a recently launched IndieGogo campaign wherein donors can contribute and secure their place to be IN the freaky film itself, appearing during the madcap party sequence AND sticking around for two complimentary nights at the official HALLOWEED NIGHT hotel where you can hang with the cast and crew!

HALLOWEED NIGHT has also locked an impressive cast of pop culture icons, influencers and celebrated oddballs that will make appearances in the film.

In case you missed the memo, DEADLY TEN is a new Full Moon Features project wherein the studio will boldly produce a series of ten original genre films this year, with each production live-streamed in front of fans. These ten films will include sequels of beloved Full Moon franchises, a spin on classic cult favorites, and daring soon-to-be essential genre films. Principal photography will begin shooting in June 2019 and continue throughout the year in Europe and North America. Release for the DEADLY TEN is slated for February 14th, 2020 on a myriad streaming platforms, including Full Moon Streaming and Full Moon’s Amazon Prime channel.

All you have to do to join the action is visit www.DeadlyTen.com and sign up for FREE. New video content and live streams will be added EVERY DAY and you do NOT want to miss it.