Leading global distributor Kew Media Distribution has secured international sales rights to a raft of new films that the company will be headlining in Cannes including the stunning and mysterious sci-fi film DEUS, rock’n’roll documentary THE QUIET ONE, the retrospective documentary CLEANIN’ UP THE TOWN: REMEMBERING GHOSTBUSTERS, the bizarre and deceptive documentary THE AMAZING JOHNATHAN DOCUMENTARY, the dystopian sci-fi film 2067, and the thriller ITSY BITSY.

Kew Media Distribution’s EVP of Sales Jonathan Ford anticipates strong interest amongst eager distributors in Cannes, commenting, “Audiences, no matter where they are in the world, demand an array of choices when it comes to films; we are committed to delivering a premium line up of high quality films that collectively appeal to every audience segment. We’re proud and excited to head to Cannes with such a diverse slate of films at a time when audiences are finding and consuming films in new ways.”

CLEANIN’ UP THE TOWN: REMEMBERING GHOSTBUSTERS is the definitive retrospective documentary, charting the making of “Ghostbusters,” featuring Dan Aykroyd, Harold Ramis, Ernie Hudson, Sigourney Weaver and Ivan Reitman, and is directed by Anthony Bueno. The film was produced by Claire Bueno (Beware the Moon: Remembering ‘An American Werewolf in London’), Derek Osborn, and co-produced by Hank Starrs (Elstree 1976, Being Frank, The Chris Sievey Story). 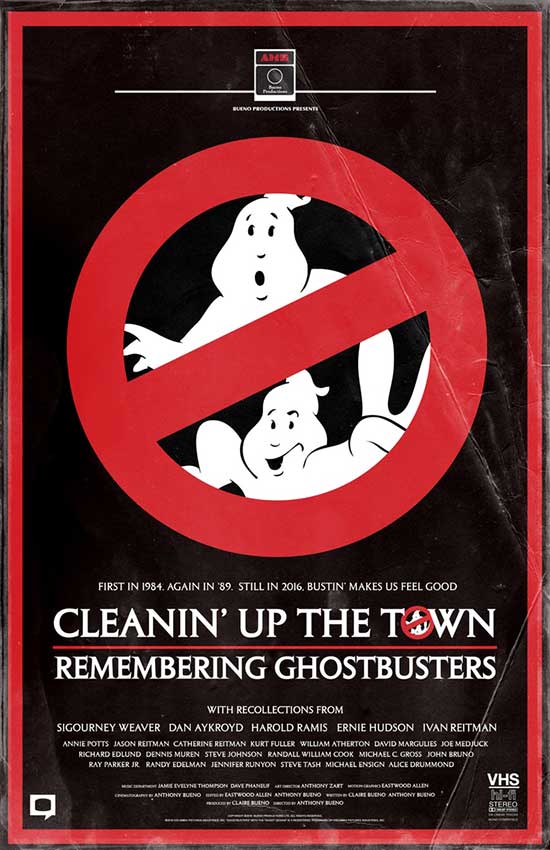 The documentary hallmarks the extraordinary achievements made by the filmmakers working in the photo-chemical era. It reveals a story of ingenuity, innovation and emphasizes just how ambitious an undertaking the making of Ghostbusters really was. 46 insightful, entertaining and heartfelt cast and crew interviews accompany a wealth of never-before-seen archive material. The documentary demonstrates how the filmmakers collectively defied adverse time constraints and all manner of technical challenges to make Ghostbusters, the movie that inadvertently changed the film industry forever.

When a mysterious black sphere is discovered in the orbit of Mars, the Achilles, a large but weathered scientific space vessel, is sent on a mission to investigate. The Achilles’ bedraggled six-person crew awake from eight months in hibernation aboard their ship to find that the strange black sphere is transmitting a single word in every Earth language ever known. The word is Deus – God. Stunned and frightened, the crew face a series of bewildering questions. Will they be the first humans in history to retrieve proof of God’s existence? If so, what does that mean for science, for them, and for humankind?

Rock’n’roll documentary THE QUIET ONE offers a unique behind-the-scenes look at the highs and lows of the life and career of Bill Wyman, former founding member of the Rolling Stones and renaissance man of rock’n’roll. Since childhood, Bill kept a detailed diary of every single day. He shot hours of unseen film footage, took thousands of photographs and collected a vast archive of memorabilia. THE QUIET ONE gained exclusive access to the collection, including the first moments of the young Rolling Stones on film in beautiful Super-8 and 16mm. The archive reveals Bill’s unique perspective and first-hand view of music’s rock’n’roll years along with his exploits with the band. However, the compulsion to collect also describes a man who is still coming to terms with the way his life unfolded, trying to find order in chaos, proving his adventures really happened. The documentary was an official selection at the Tribeca Film Festival 2019.

A My Accomplice Production in association with Gizmo Films, THE QUIET ONE is written and directed by Oliver Murray (A Stranger Kind) and produced by Jamie Clark (No Distance Left To Run), Jennifer Corcoran (To The Front: Scenes From A Women’s Rock Camp), Ian Grenfell, and Suzanne Accosta Wyman. The film’s executive producer is Jason Bick (20,000 Days On Earth).

What begins as a documentary about ‘The Amazing Johnathan’, a uniquely deranged magician who built a career out of shock and deception in the 1980s, becomes a bizarre story about the unravelling of his documentarian, Ben Berman. After Johnathan is diagnosed with a terminal heart condition and given one year to live, he is forced to retire his act. Cut to three years later: Johnathan is not dead, much to everyone’s amazement, and Ben Berman films the illusionist on an epic comeback tour. But as their mutual journey kicks off, Johnathan drops a bombshell that sends the film spiralling into uncertainty. Embracing this unforeseen obstacle, Ben delves deeper to determine what is truth and what is illusion. Built into the heart of this quick-witted and self-reflective story is an indelible commentary on the process and ethics of making a documentary today. Issues of negotiation and access become the central threads that reveal, and further cloud, our understanding of this elusive protagonist. This debut feature is a wild ride that careens off the rails in highly entertaining and unexpected ways.

In the year 2067, Earth is on the verge of collapse. After years of doing too little to reverse climate change, humans are paying a terrible price – forests, plants and wildlife are gone, and soon humans will be too. In this grey, dying world, the synthetic oxygen people breathe through masks has begun to make them sick. With no cure in sight, the only place humanity can look for help is to the future, in the hope someone is still alive and can tell them how to save the planet. Chronicorp, the world’s leading supplier of oxygen, has spearheaded that project. One day, they receive a message from 400 years in the future: “Send Ethan Whyte”. Ethan is a utility worker at Chronicorp; seemingly a nobody. But the future asked for him, and the people in charge of this project aren’t going to disappoint their saviors. Ethan is defiant at first, but encouragement from Jude, his surrogate big brother, and promises from Chronicorp that they will help Ethan’s sick wife convince him. Ethan barrels into the future as humanity’s last hope. He arrives into a new world – lush, green, and… alone. Ethan was led to believe that the future would give him answers, but there are only more questions, most notably: if he’s the only one here, who sent that message?

When Kara (Elizabeth Ann Roberts, Old Fashioned, CSI), a single mother struggling to raise two children in New York City, receives a job offer to work as a private nurse in the mid-West, it’s an opportunity she can’t refuse. So she uproots her family, moving them to the remote farm owned by Walter (Golden Globe®-winner Bruce Davison, Longtime Companion, X-Men), a semi-retired antiquities appraiser who has multiple sclerosis. At first, things seem normal enough. But what Kara doesn’t know is that doom preceded their arrival in the form of a mysterious ancient relic. And, if her family are to survive the horrific nightmare now lurking in the shadows, they will need to confront their deepest fears and personal demons.

In addition to these new titles, Kew Media Distribution’s impressive international slate includes A GLITCH IN THE MATRIX, Rodney Ascher’s newest documentary film venture exploring the idea of Simulation Theory; a neo-noir psychological thriller adapted from the acclaimed stage-play from award winning writer/director Julius Amedume’s RATTLESNAKES; CHAKA KHAN: KEEP ON HOLDIN’ ON – a fascinating story detailing 10-time Grammy® Award winner Chaka Khan’s time as a civil rights activist and member of the Black Panther movement; the rock documentary SUZI Q; and a documentary on music icon Prince – MR NELSON: ON THE NORTH SIDE, among several others.