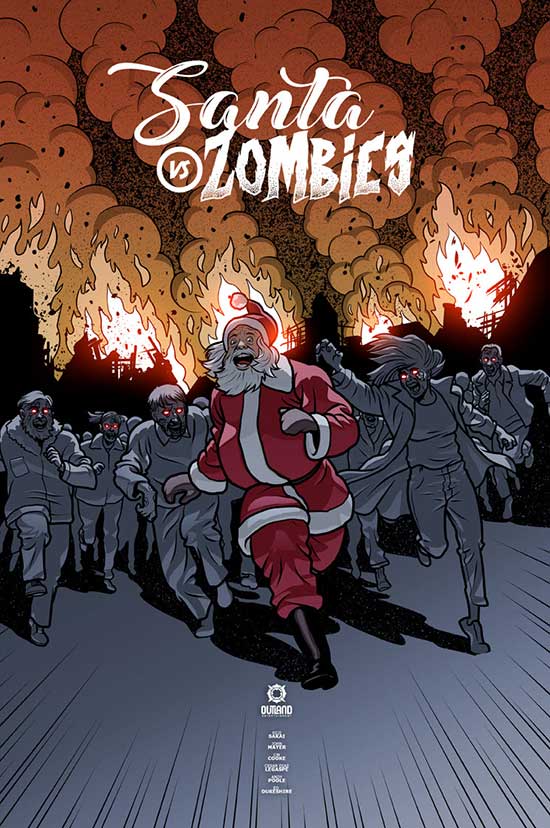 A new graphic novel from Koji Steven Sakai and John Mayer called Santa VS Zombies launched on Kickstarter on April 9, 2019. This sixty-page graphic novel follows a burned-out Santa Claus who reluctantly embarks on his last chimney crawl only to find his world turned upside down by a zombie apocalypse. With the help of a crew of children and a single mother, Santa rediscovers his Christmas spirit while saving the world.

“Santa VS Zombies combines two of my favorite things…Santa and zombies,” explained co-creator Koji Steven Sakai. “If every day was a zombie Christmas I’d be happy.” Sakai’s love for zombies is evident in his prose fiction, including his debut novel Romeo & Juliet Vs. Zombies. Sakai is a comics veteran, and his graphic novel, 442, which follows an entirely Japanese-American regiment during World War II, was released in 2017.

“I was always the rebel as a kid, so I never pictured Santa as all cuddly, warm, and fuzzy,” said co-creator John Mayer, who has previously written novels and nonfiction. “I knew there was a guy under there who could kick some ass—I mean, he lived all those centuries—that had to take some BAD…This is my Santa!”

The Kickstarter will support printing of the graphic novel. Other stretch goals, when met, will increase the quality of the book from cover gloss finish to French fold covers and as well as hardcover editions. The Kickstarter can be supported at www.kickstarter.com/projects/327474418/santa-vs-zombies

ABOUT SANTA VS ZOMBIES

Meet Santa. He’s having a mid-life crisis. He hates his job and wishes he was doing anything else other than being Santa. He’s just going through the motions and that’s why he doesn’t notice the zombie apocalypse until it’s almost two late. Saved by two kids, he at first tries to get back to the North Pole only to discover that his reindeer have been eaten. On the run and just trying to survive, Santa befriends the kids and falls in love with their recently-divorced mother. Soon Santa rediscovers his Christmas spirit and does everything he can to save Christmas for the kids—even if it means his own death.