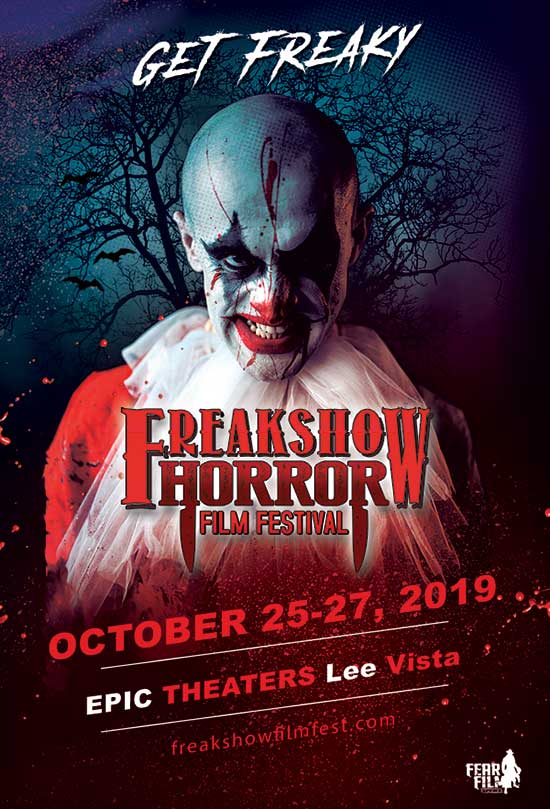 FREAKO the CLOWN invites you to GET FREAKY and experience the best independent horror films from around the world! See indie films before they are released or get major distribution! The FREAK SHOW Horror Film Festival has been supporting independent artists with their work for over 14 years, screening such major films as “Spiders 3D”, “The Black Waters of Echo’s Pond”, “Alien Raiders”, and last years indie hit “Hunter”.

The festival is back at their new home at Epic Theaters. The theater features state of the art projection, stadium seating, reclining seats, and dolby surround sound. “We love movies, especially horror movies and being able to screen the films at this theaters is a dream come true for not only us but for the filmmakers as well”, says Founder and Executive Director Robert Massetti. “We work so hard to put on this event so we can help filmmakers continue to make their art!”

FREAK SHOW Horror Film Festival currently has a CALL FOR ENTRIES. We are looking for Features, Shorts and Student films in the horror genre. For more information and complete rules please visit the festival website at freakshowfilmfest.com.

FREAKO the Clown looks forward to seeing you at the festival! He’s just Dying to meet you! And remember FREAKS, it’s always time to GET FREAKY!

Get more information about the FREAK SHOW Horror Film Festival by visiting their website at FREAKSHOWFILMFEST.COM