Home | CLIMAX arrives on Blu-ray and DVD May 28

CLIMAX arrives on Blu-ray and DVD May 28 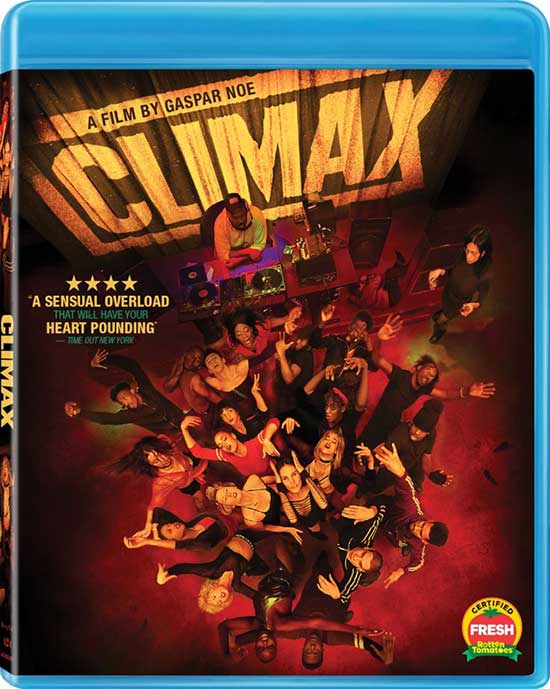 Another truly unique and sensual vision from filmmaker Gaspar Noé dances into your home when Climax arrives on Blu-ray™ and DVD May 28 from Lionsgate.

Another truly unique and sensual vision from filmmaker Gaspar Noé dances into your home when Climax arrives on Blu-ray™ and DVD May 28 from Lionsgate. The film will be on Digital May 7 and On Demand May 14 from A24. Rotten Tomatoes Certified Fresh™, this hypnotic and provocative horror film centers on a troupe of younger dancers who, while rehearsing in an empty school building, learn their sangria is laced with LSD and descend into a passionate and violent delirium. Stirring up buzz upon its premiere at the 2018 Cannes Film Festival, the film is “a sensual overload that will have your heart pounding” (Joseph Walsh, Time Out New York) and features rising star Sofia Boutella, Romain Guillermic, Souheila Yacoub, and Claude Gajan Maull. The Climax Blu-ray and DVD include a never-before-seen making-of featurette and will be available for the suggested retail price of $24.99 and $19.98, respectively.

From director Gaspar Noé (Enter the Void) and actress Sofia Boutella (Atomic Blonde) comes this hypnotic, shock-filled story of a party that descends into delirium over the course of one wintry night. In an empty and remote school building, a French dance troupe has gathered for rehearsal. The rehearsal morphs into a party—and then turns nightmarish as the dancers discover they’ve been drinking sangria laced with LSD. Passions and violence erupt as the night moves from jubilation to full-fledged anarchy.