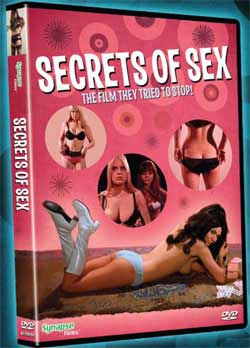 A brainy sex flick with a sense of humor, the film begins with a narrator/mummy who guides us through a number of vignettes promising to show what some of us go through in the pursuit of sexual pleasure. There’s a fabulous ten minute opening, where the half naked go go dancers have vegetables thrown at them. One of the tales features a female photographer who tortures a male model. Another has a female burglar (Cathy Howard) caught by the house owner. The craziest involves a nerd hiring a blond call girl (Sue Bond) in pursuit of a menage-a-trois with his pet lizard; and there’s a endearing misadventure with secret agent Lindy Leigh (Maria Frost) who does topless safecracking.

Bizarre is an older release by Synapse Films that has been repackaged under the title “Secrets of Sex”. Though I think the first title may have been more appropriate. Before we dig in, let me explain. This film is probably closer to the description of “fragmented” than say straight off bizarre. Bizarre makes me think more of psychedelic Tommy-like images and this film is not really in that vein. Though what possessed the director to create such a hodge podge of stories is beyond me. The entire film is narrated by a mummy, who claims to have lived through all this content. The film flashes back and forth as he spouts out rather philosophical rants that for the life of me went over my head most of the time. Then for about 3 minutes we jump back into a section that claims imagine making love to…. (this girl, this man, this boy…etc) which is funny in a Love American style way but at the same time sort of boggling to watch. Yes, there is plenty of nudity in this film that appears with in each segment. The segments are fragmented with a variety of short …well segments. In one, a lady cat burglar breaks into a mans house is caught, then makes love to him before leaving and taking the goods with her. In another a young woman plans birthing a new son with a much older man. Though is horrified at the results of their union.

In another, a group of girls dance around partying, stripping and then are approached by a gang of men sporting machine guns. We are really never given alot of meaning to this episode rather than some sort of eye candy mixed with subtle shock and awe. The film direction flows by narration thru each of these segments. Another includes a willing model who has agreed to pose for a series of suffering shots, though little did he know that the intention of the photographer is more real than he anticipated.

With all the strange experiments in cinema that were tackled in the 70’s, there were bound to be a few that just way beyond consumer consumption. Antony Balch directed this British film under the contribution of 5 writers. The main goal was more for exploitation reasons but was also aimed at an attempt for approaching the content in a more humorous way. It received mixed reviews that ranged from “shocking” to “erotic” to “highly original”. There has also been a variety of edited versions that have appeared over the years mainly cutting down some of the more explicit sex scenes. The movie scope is combined in an anthology-like fashion featuring a number of well endowed females and male frontal nudity. From a genre standpoint, I’m sure there is several directorial comparisons, but in essence its a bit of its own creation.

My guess is american audiences will just simply find this plain weird and hard to follow though it is a bit of a showcase for British style humor filled with topless models on strange premise. As the film is  often referred to as “never see anything like it”, this much is probably true with its fragmented storyline sort of presentation. It tends to mix a few elements with horror approaches but that is just more embellishing than anything. In any case, you deserve to at least sit thru this once for those times when your friends make claims to have seen something really weird that you can compare notes on.