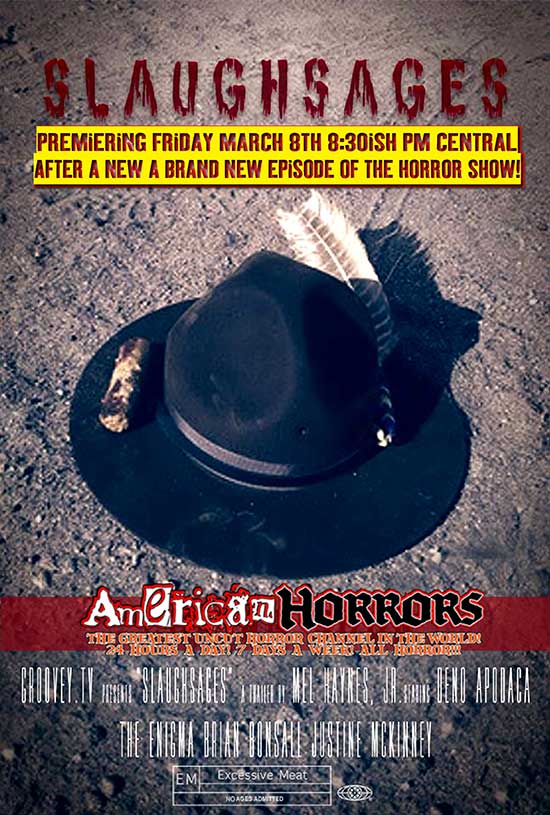 The rock n roll comedy horror short Slaughsages starring Brian Bonsall (Star Trek: The Next Generation/Mikey/Ataris guitarist), Jonathan Tiersten (Sleepaway Camp/The House That Wept Blood) and The Enigma (The X-Files/Firecracker) will be premiering this Friday on the American Horrors Channel. Slaughsages marks the return to acting for Brian Bonsall after a 15 year hiatus and Jonathan Tiersten gives a performance that is sure to get him in some hot water with his Sleepaway Camp cast mates.

“After this nightmare sausage fest you’ll never look at your sausage the same way again!” said Hart D. Fisher laughingly, “I could smell the love wafting up off of this homage to all of your favorite after school special b-movies of the week, I knew we had to have this on American Horrors.”

Slaughsages  is regarded as a pork based homage to Attack of the Killer Tomatoes with rapid fire puns, jokes and phallic shenanigans  plus lots, we mean lots, of ketchup and mustard.

Director Mel Haynes, “Being a child of the 80’s, my nights and weekends were fueled by horror films that I found by walking through my favorite section of the movie rental store or by being on the right channel at the right time to find a movie to watch. American Horrors carries this tradition of mine and brings back the wonderful feeling of discovery to new and exciting films. I could not be more excited to contribute to this experience and am honored to be part of this channel.”

Slaughsages also contains songs and performances from Brian Bonsall’s band Lowjob, the crushing metal band Fist Fight and the native rockers Ndaaz. Benton Mckibbon vocalist for Mire and Moth stars in Slaughsages as well as Isaac Archuletta of Dead For Denver in a performance we guarantee turned him off of ketchup for life.

“We received many life lessons during the production of Slaughsages, but one I am most fond of is the smell of grease will never leave your camera gear if you tape cooked sausages to it,” Director Mel Haynes.