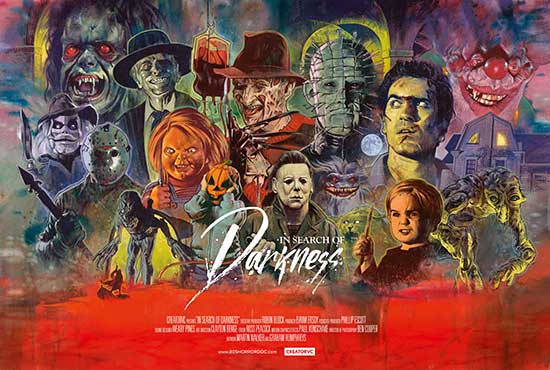 Celebrating the greatest and most influential decade in horror, the groundbreaking documentary In Search of Darkness: A Journey Into Iconic ‘80s Horror launched last October with a highly successful Kickstarter campaign that captured the imagination of fans from all over the world, and netted more than 300% of the campaign’s initial fundraising goal. Now, with the documentary in post-production, and gearing up for a release date during Summer 2019, the team at CreatorVC is providing fans with one more opportunity to be a part of horror history before it’s too late.

In Search Of Darkess – Trailer – Final Indiegogo Pre-sale campaign from CreatorVC on Vimeo.

On Tuesday, March 5th, a final Indiegogo campaign in support of In Search of Darkness, which will provide horror fans with their final chance to support this landmark celebration of the greatest decade in horror history, and experience for themselves a nostalgia-fueled roller coaster ride that will not be available after this final crowdfunding campaign for ISOD concludes on Sunday, March 31st. To find out more information on how you can purchase your own copy of In Search of Darkness on Blu-ray and DVD, as well as the exclusive backer rewards currently available, please visit:  www.indiegogo.com/projects/in-search-of-darkness#/

Featuring compelling critical takes and insider tales of the Hollywood filmmaking experience throughout the 1980s, In Search of Darkness will provide fans with a unique perspective on the decade that gave rise to some of the horror genre’s greatest icons, performers, directors and franchises that forever changed the landscape of modern cinema. Tracking major theatrical releases, obscure titles and straight-to-video gems, the incredible array of interviewees that have been assembled for ISOD will weigh in on a multitude of topics: from creative and budgetary challenges creatives faced throughout the decade to the creature suits and practical effects that reinvigorated the makeup effects industry during the era to the eye-popping stunts that made a generation of fans believe in the impossible.

In Search of Darkness will also celebrate many of  the atmospheric soundtracks released during that time, the resurgence of 3-D filmmaking, the cable TV revolution and the powerful marketing in video store aisles, the socio-political allegories infused throughout many notable films, and so much more.

“Assembling the amazing interview talent and speaking with them for In Search of Darkness has been an absolute thrill for this longtime horror genre fan, and I’m thrilled to be able to share this journey into ‘80s horror with audiences,” said David Weiner, director of In Search of Darkness. “Calling anything ‘definitive’ can be quite a challenge for any filmmaker, but I genuinely believe we have captured something very special for horror fans — and fans of film in general — who are interested in more of a genre deep dive and an examination of a decade’s influence, than simply a broad survey of horror.”

According to Robin Block, Executive Producer & CEO of CreatorVC, “Crowdfunding In Search of Darkness provided us with the freedom to create a unique proposition and format for true fans of ’80s horror. With this project, we’re delivering an experience the likes of which has never been seen before in commercial filmmaking, and with our world-class and unique line up of ’80s horror talent, it is unlikely to be witnessed ever again. It’s been exciting to collaborate directly with the horror community thus far, and we’re so grateful for all the support we’ve received over the last few months, which includes both the talent who are involved in the documentary itself as well as all the original campaign contributors out there who enthusiastically share our passion for this decade of horror greatness.”

CreatorVC is an independent producer of long-form factual entertainment. Our projects are crowdfunded, which means we are completely focused on creating content that our audience loves. We provide our backers with the opportunity to influence and enable exciting projects on the topics they are passionate about. We see them as co-creators and actively encourage feedback and input; it’s as much their project as it is ours. We’re motivated and excited about our projects because we only work on concepts that we love.