Home | ‘The Legend of the 7 Golden Vampires’ Debuts on Blu-Ray from Scream Factory on April 9, 2019

‘The Legend of the 7 Golden Vampires’ Debuts on Blu-Ray from Scream Factory on April 9, 2019

THE LEGEND OF THE 7 GOLDEN VAMPIRES
DEBUTS ON BLU-RAY™
FROM SCREAM FACTORY
ON APRIL 9, 2019 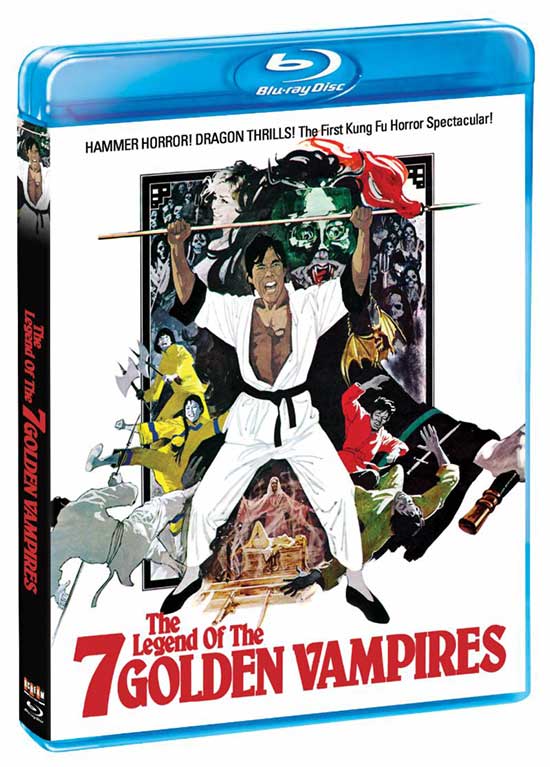 Black belt vs black magic. Scream Factory presents The Legend of the 7 Golden Vampires on Blu-ray™ for the first time on April 9, 2019. Presented here for the first time in high definition is Hammer’s original uncut version. It was released in the US in an edited version called The 7 Brothers Meet Dracula which is also included here in high definition as a bonus feature.
The complete list of bonus features also includes new interviews with actor David Chiang and Hong Kong film expert Rick Baker, and new audio commentary with film historian Bruce G. Hallenbeck.
Professor Van Helsing (Peter Cushing) and Count Dracula (John Forbes-Robinson) meet again in this spectacular Kung Fu horror thriller set in the village of Ping Kuei. After learning about the seven golden vampires of the village, Hsi Ching (David Chiang), Vanessa Buren (Julie Ege) and Mai Kwei (Szu Shih) offer to guide Van Helsing and his son to Ping Kuei to free it from the curse of Count Dracula.
Throughout their journey, the group encounters several unwanted attackers until they arrive at the golden vampires’ derelict temple, inhabited by Count Dracula. In the temple, Van Helsing and the count begin a fearsome battle to the death – an ultimate clash between good and evil!
Special Features:
Share

Tags The Legend of the 7 Golden Vampires