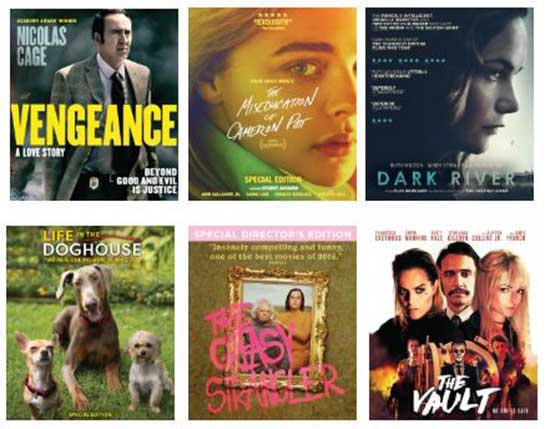 FilmRise March home video lineup offers up a wide variety!
FilmRise is gearing up for a massive March with six new titles on their monthly slate, each one offering up something different to entertain viewers of all kinds. The March lineup begins with five titles hitting streets on March 12th, starting with the Nicolas Cage action-drama Vengeance: A Love Story. In the vein of Death Wish, Cage stars as a detective seeking justice for a single mother that is brutally assaulted in front of her 12-year-old daughter. After the court refuses to put the suspects behind bars, Cage is forced to take action into his own hands.
Chloë Grace Moretz gives a dazzling performance in The Miseducation of Cameron Post. Based on the novel by Emily M. Danforth, the story follows Cameron as she’s sent to a gay conversion therapy center where she forms a bond with a group of fellow teenagers and together they fight for survival. Certified Fresh, the film won the Grand Jury Prize at the 2018 Sundance Film Festival.
Continuing the Certified Fresh selection, Film Rise is proud to release Clio Barnard’s Dark River. This winner of the Platform Prize at the Toronto International Film Festival is the story of a woman that returns home to her family farm after the death of her father. Having been gone for more than fifteen years, she is forced to face dark memories from her past while attempting to rekindle the relationship with her brother and regain control of her family situation.
Dog lovers will certainly want to add Life in the Doghouse to their wish list. This heartfelt and inspiring documentary showcases the remarkable work done by Danny Robertshaw and Ron Danta at Danny & Ron’s Rescue. In their ten plus years of working together the duo has saved more than 10,000 dogs and their story is sure to bring a smile to your face.
For those wanting to get a little down and dirty look no further than The Greasy Strangler. This modern cult classic has been delighting the late crowd since its 2016 release and shows no signs of slowing down. Is it a movie for everyone? No, but it’s an experience you’ll never forget.

The month comes to a close with the March 26th release of Dan Bush’s The Vault. This genre mash-up opens like a pretty standard heist film about a bank robbery but the tables soon take a turn when it’s revealed that the bank is haunted. The Vault Stars James Franco, Taryn Manning and Clifton Collins, Jr.