Nancy Drew and the Hidden Staircase – Out in Theaters March 15 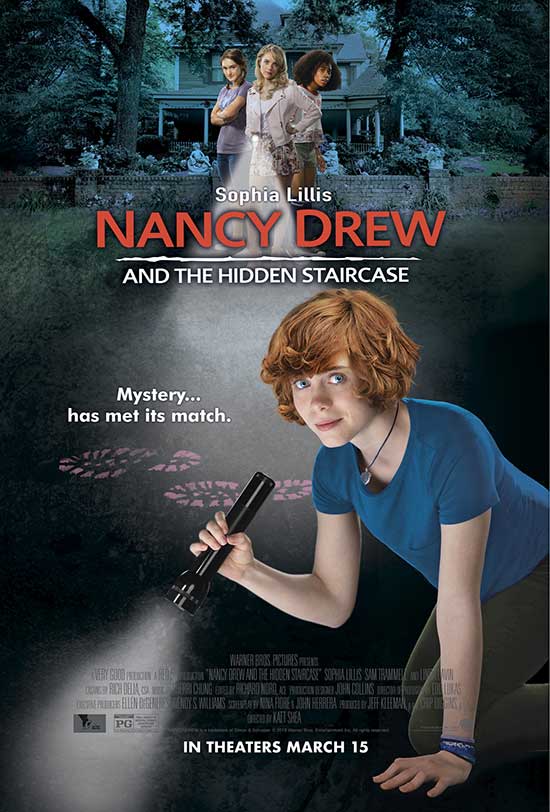 The iconic mystery solving teenager from the classic Nancy Drew books is back with an all-new movie in theaters March 15 from Warner Bros.! Nancy Drew and the Hidden Staircase is Co-Produced by Ellen DeGeneres, and the film stars Sophia Lillis (IT and “Sharp Objects”), Sam Trammell (“True Blood” and “This is Us”), and Linda Lavin (“The Good Wife” and Alice), and follows Nancy Drew in her new town, making new friends and on a mission to solve the case!

We recently announced the film – and we wanted to make sure you had all of the assets – so you can alert your readers.

After the death of his wife, Carson Drew decides to leave Chicago behind and make a fresh start with his daughter in River Heights.  But for 16-year-old Nancy Drew, life in a small town is mighty dull. She longs for excitement, adventure, and the chance to make a difference.  Nancy gets that opportunity when she is asked to help solve the ghostly activity at the Twin Elms mansion.  Can she help explain the creaking footsteps, exploding lightbulbs and the ominous creature?  Is it the handiwork of high-school bully Derek Barnes? Or is it possible that the ghost of original owner Malcolm Colfax is back for revenge? Recruiting her best friends George and Bess, along with local “mean girl” Helen, Nancy Drew is on the case!

Nancy Drew has been a  #1 female heroine for young girls since the 1930s.  There have been over 80 million books sold! The books have been translated in over 45 languages. There have also been other movies, a TV series and Nancy Drew video games.  Generation after generation Nancy Drew is re-introduced to new fans – and we think new and old fans alike will love this all-new feature film!

We hope you can find space to announce this information to your readers and help us create awareness that Nancy Drew and the Hidden Staircase will be in theaters next month on March 15! If you cover on your socials – please don’t forget to hashtag #NancyDrew.