Home | Alex DiSanto Collection will be Released on Bluray and DVD

Alex DiSanto Collection will be Released on Bluray and DVD 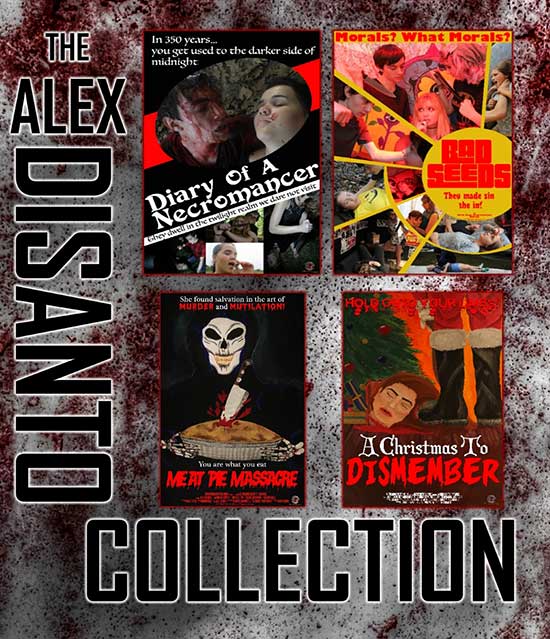 The Alex DiSanto Collection will be released on Bluray and DVD on March 5, 2019 by TVSK Entertainment on Amazon.com. From 2014 – 2107, Canadian teen director, Alex DiSanto, went into small towns and backwoods along with his friends and produced some of the most bizarre & daring horror films ever realized. Capturing the essence of youth, the innocence of adolescence is ultimately tested before becoming corrupt in his debauched tales — pitting the young as killers/survivors, while encapsulating dark themes such as cannibalism, sadism, drugs, abuse, and even the occult! This horror anthology of morbid tales features:

*MEAT PIE MASSACRE*
Carrie, a young psychopath runs a small business where she murders  people and makes them into pies. She then forces her unstable brother to  help her out.
/41 Minutes./

*BAD SEEDS*
Three siblings immerse themselves in a world of love, LSD and hustling. But they find out that everything isn’t as good as they thought once  they get caught up in murder, blackmail and the deadly side effects of  experimental drugs.
/57 Minutes./

*A CHRISTMAS TO DISMEMBER*
The most popular clique at school finds themselves dancing with death as Santa begins to deviously hack, slash and unwrap them. Now they’ve gotta barricade themselves and outsmart the killer or they may just end up in their own stockings.
/41 Minutes./

*DIARY OF A NECROMANCER*
Asher, a vampiric necromancer, saves a girl being targeted by three cannibalistic witches. The two team up to kill the degenerates not knowing that the witches have chosen Asher as their next target.
/52 Minutes./

Pre-orders can be taken through the Amazon links at TVSK Entertainment’s Web site below. Fans may also obtain their copy of the official magazine  at the link below.