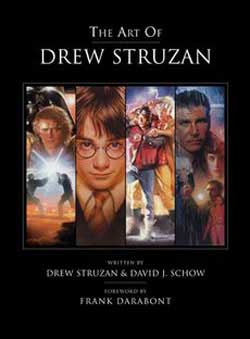 I’ve seen alot of art books come around in my time, though this one is extra special. As the theme of the book suggests, this is an overview of one man’s work from an era when poster art was still something of value, respect and artistry. We all know what is being discussed as several of us have wondered the same thing. Maybe it’s us older generation, I’m not sure…but one thing that’s been hovering for along time is what ever happens to the cool painted poster art? As the introduction does more than a thorough job of explaining things, we find that the world has changed with marketing agents calling the shots on quicker, faster and less artistic posters churned out as fast as the photoshop marketing departments can create them. We’ve scoffed at the floating head images and the sort of expected trends that appear on most posters these days.

Drew was one of the greats who created an art form out of illustration. It’s no wonder, as some of his paintings are featured on the biggest movies ever created and remembered for that matter. The book explores the man, his art and the progression of a simpler time when Drew would produce comps and drawings until the studios gave him the go ahead on producing the final pieces. His routine and work ethics are discussed as he would often be asked to work a 24 hour day just to get a finished piece to the studios by the morning. “The Thing” poster is one such piece, but what you’ll find in this book is not only several more but several more masterful interpretations. Recognized posters pop off the page like an old friend while others reveal the ones that didn’t make the final cut but still are quite beautiful in their  own rights. Others come from movies that never went to final approval and sometimes were passed on to other artists. Its a unique tale and a unique book that is a homage to a a great artist one way or another.

Illustration as they used to call it was a trade that only a few choice artists would be called upon for big budget features that directors such as Spielberg and Lucas would call upon. From this era was a memorable collective of original pieces that just don’t stand up the machine gun produced marketed images that are exhausted upon us today. In fact, it’s not uncommon nowadays for new features to create 10 different posters that are marketed, exploited an then forgotten just as easily. Drew talks about each piece as the chapters reveal the gentle nature of the man and his extreme talent for creating iconic masterpieces.

This volume contains a smattering of some of the greatest films ever created and the associated artworks, comps, ideas and alternate versions. Highlights include Harry Potter, Indiana Jones, Star Wars, Hellboy, Masters of the Universe, Back to the Future and alot more!

This impressive hard cover book comes from the team of Titan Books in a oversized fantastic volume that will engage its readers with visual magic. Drew’s art is the kind that engulfs its viewers with fine details and elaborate concepts. The volume is a treasure in itself that is deserving to any artistic mind that wants to explore the words and images from a true master. The volume is one of a kind with tons of original comps and images that have never been seen to famous film production gone past. Give this book a look and then do it again! You won’t be disappointed