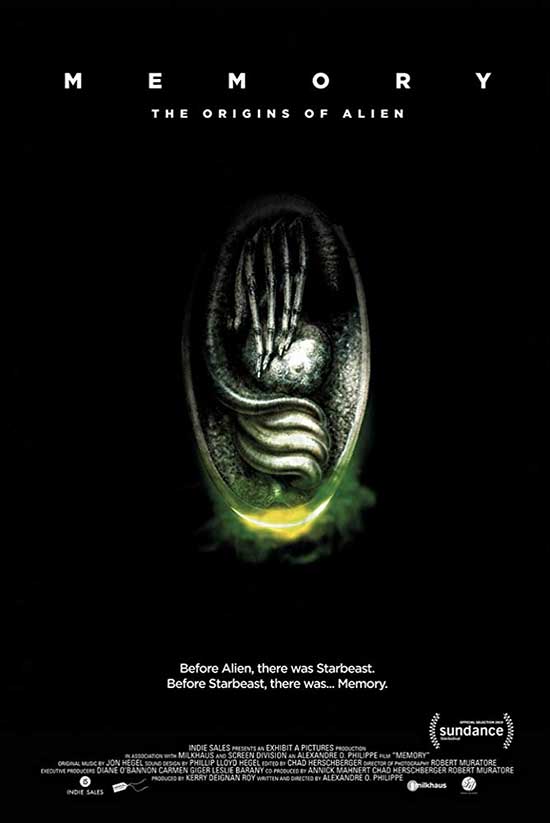 I want you to see the amazing first-look poster for MEMORY – THE ORIGINS OF ALIEN, the new documentary from Alexandre O. Philippe, the acclaimed director of 78/52 and DOC OF THE DEAD! We’d absolutely love your support in getting the word out about it!

Memory was a script that Dan O’Bannon started in 1971, abruptly hitting a wall at page 29. But after the idea gestated for several years, it ultimately took the form of Ridley Scott’s masterpiece Alien.

Alexandre O. Philippe’s documentaries — most recently 78/52, about Hitchcock’s Psycho shower scene — have interrogated cinema’s cultural ripples. If MEMORY – THE ORIGINS OF ALIEN were only a comprehensive account of Alien’s origins — ancient myths, comic books, H.P. Lovecraft, sci-fi movies, and parasitic wasps — it would still be fascinating. But how did Alien lodge itself so indelibly into our cultural imagination? Philippe’s real interest lies in the deep resonance of myths and our collective unconscious. The strange symbiotic collaboration between Alien creators O’Bannon, Scott, and H.R. Giger suggests a greater synchronicity across history, art, and storytelling, a synchronicity that gives us the Furies, creatures of Renaissance painting, and even chest-bursting aliens.

Propelled by a pure joy of cinema (and sociology), the film is strewn with unearthed archival material, designs, and story notes. It’s safe to say you’ll never think of Alien the same way again.
Share

Tags MEMORY: THE ORIGINS OF ALIEN