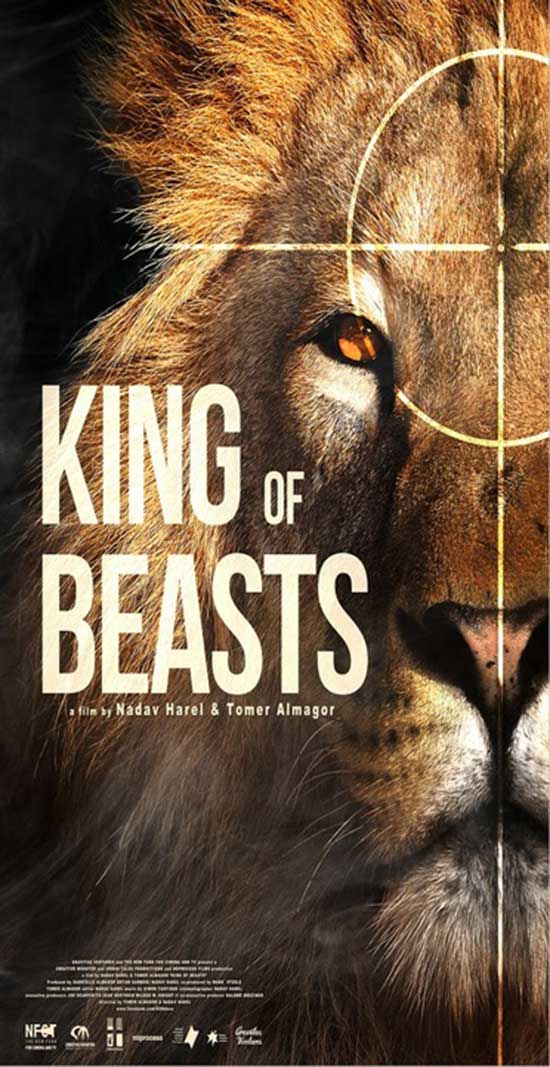 KING OF BEASTS, an important trophy hunting documentary film 7 years in the making, will debut in theaters for a multiple city limited run, and be available on all platforms and VOD on Jan 25th.
Gravitas Ventures, a Red Arrow Studios company, has acquired worldwide rights to award winning documentary KING OF BEASTS directed by Nadav Harel and Tomer Almagor.
With unprecedented access and unique firsthand footage to illustrate this breathtaking and complex story, KING OF BEASTS dives deep into an American hunter’s relentless pursuit of his 14th lion trophy. This observational documentary profiles the hunter and his team of processional hunters, videographer, Tanzania’s bushranger and their local guides as the film unveils the inner workings of an African economy whose sole sustenance is provided by trophy hunters. It throws into stark relief the question of where savagery truly lies – and who is the King of Beasts.
Co-director Nadav Harel: “KING OF BEASTS tells an unvarnished story of an inconvenient reality, laying out the powerful facts for anyone striving to revolutionize the politics of our natural treasures on a global scale. Our time filming in the wilderness of Namibia and Tanzania revealed a complex economy of conflicts, territory, food, and money.”
“It’s not romantic,” agrees Co-director Tomer Almagor. “I started this project with the intention of saving African lions. I’ve met trophy hunters, scientists, activists and even politicians. The relationship between man and nature in Africa today is far more complex and nuanced than I anticipated, but I hope that our film serves as an alarm call, and a platform for dialogue between all the different parties involved, on the way to change and conserve our wildlife for future generations.”
Public concern over lion trophy hunting has risen, through the death of Zimbabwe’s beloved Cecil the Lion in 2015 and advocacy of celebrity animal activists and conservationists.
President Trump has relaxed the laws concerning trophy hunting and it is critical to understand the politics and economics and the devastating effects on the dwindling lion population of Africa.  KING OF BEASTS was shot over the course of seven increasingly tense years at the blurry intersection of sport, politics, economics, and Western privilege.
“KING OF BEASTS has worldwide audience appeal because of the passion its subject inspires and the timeliness of the questions it raises,” says producer Gabrielle Almagor. “The beauty and majesty of the cinematography and impeccable choice in direction reveal a viewpoint that we have not yet explored in a feature-length documentary. There is no precedent to show what elimination of the top of the food chain does to ecological balance. This film allows the viewer to see all the threats facing the lions of Africa and be a part of the danger, problems, dialogue, and (we hope) to find a solution in a never-before-seen way.”
Share