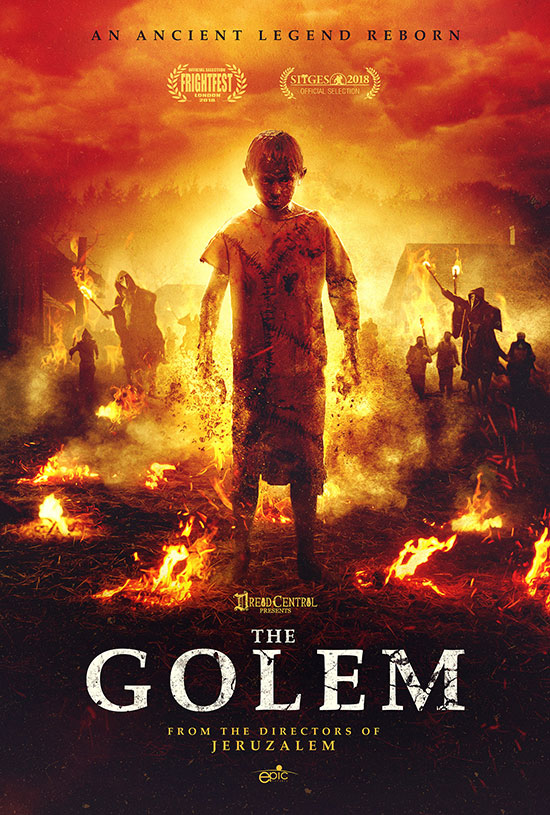 During an outbreak of a deadly plague, a mystical woman must save her tight-knit Jewish community from foreign invaders, but the entity she summons to protect them is a far greater evil.

In this stunningly reimagined period horror version of an old mystical legend, a Jewish community in a shtetl are besieged by deadly intruders. Set in 17th century Lithuania, Hanna (Hani Furstenberg) the wistful, conflicted wife of the local rabbi’s son Benjamin (Ishai Golen), secretly turns to Jewish mysticism and The Kabbalah to conjure up a dangerous entity to protect her community. But the creature she molds out of mud and summons to life echoes her tragic past and becomes so dangerously connected to its creator, that Hanna can’t see what a heartless monster she has fashioned from abject fear and desperate loathing.

“The Golem was created with the need to bring the fascinating and yet unheard Jewish mythology to the screen,” says director Doron Paz. “These legends are what horror films are made of: abnormal creatures, demons, monsters and the dark side of Judaism.”

Director Yoav Paz adds, “The most famous story is that of the Golem of Prague – a mud figure out of the ground, created by the Rabbi of Prague (the Maharal), using the powerful Kabbalah wisdom. While this myth may have inspired our storytelling, we knew that we wanted to make a new and relevant adaptation of it which would focus on a female heroine and a unique twist on the ancient Golem. We decided to create something based on its Jewish origins as well as contemporary horror, and a new genre was born: Jewish Horror”

THE GOLEM is directed by Doran Paz and Yoav Paz. Third generation directors, The Paz Brothers started working in the film industry at young ages. After graduating Tel Aviv University Film School and years of directing music videos and television commercials, they started writing and directing for prime-time Israeli broadcasts. In 2010, their critically acclaimed debut film, PHOBIDILIA, had its world premiere at the Toronto Film Festival. Their second feature, JERUZALEM, premiered at the Fantasia Film Festival and was released in theaters worldwide. THE GOLEM is their second collaboration with Epic Pictures and the first Dread Central Original. The film is written by Ariel Cohen and produced by Shalom Eisenbach. Patrick Ewald and Shaked Berenson serve as Executive Producers. THE GOLEM stars Hani Furstenberg (The Loneliest Planet, Campfire, Yossi and Jagger, Saints Rest) and Ishai Golen (Prisoners of War, The Last Patrol, False Flas, Tironoot).