Home | DIRECTOR SITS through own Dumb movie for OVER 52 HOURS

DIRECTOR SITS through own Dumb movie for OVER 52 HOURS 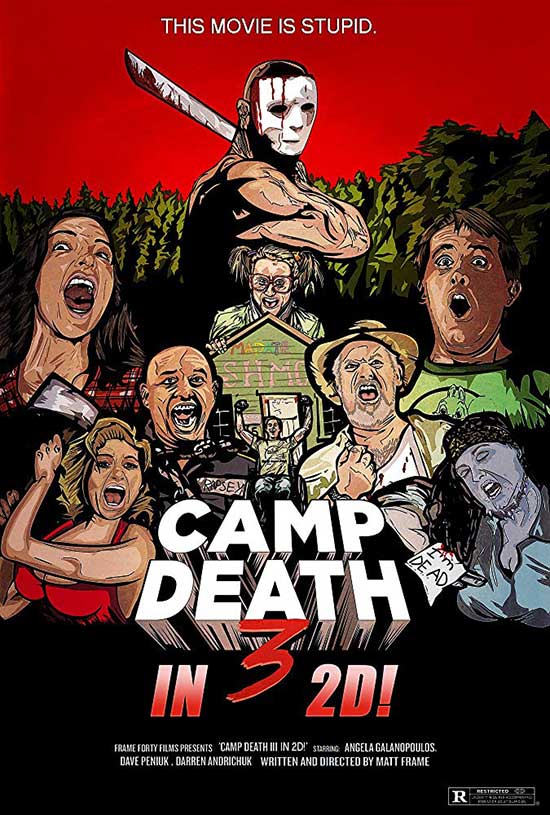 Moronic PR stunt was aimed to promote imminent release of ‘Camp Death III in 2D!’ Vancouver, British Columbia – January 3, 2019. For the purposes of promotion (and raising much needed advertising funds) Canadian Director Matt Frame sat through his film ‘Camp Death III in 2D!’ 34 continuous times for a grand total of 52 hours, 27 minutes, and 23 seconds. In the end, Frame raised 120% of the campaigns $1,000 goal.

The event was streamed live via Facebook, Twitch, & YouTube and began 8pm (PST) on Saturday December 29, 2018 and finished 12:30 am (PST) Tuesday, January 1, 2019. Frame provided running commentary throughout the 52+ hours and was oftentimes joined by cast/crew of ‘Camp Death III in 2D!’ who offered insight and stories from the production.

“It wasn’t too bad to be honest” said Frame, “I think the first 12 hours were the worst. Those are the hours in which you really begin to question your life choices.” ‘Camp Death III in 2D!’ is a comedy-horror parody of ‘Friday the 13th Part III 3D’ that has enjoyed a successful festival run since September, racking up 14 acceptances, 4 awards, and several nominations.

In February 2019 the film is being released digitally via Amazon Prime, hence the underlying purpose of Frame’s (admittedly) moronic promotional stunt. “Believe me, I comprehend how idiotic and self indulgent this appeared,” declared Frame “but if I concerned myself with the opinions of strangers then I wouldn’t have raised the money to make the film in the first place.”

Frame is referencing his August 2014 World record ‘Coconut Walk’ in which he chained a coconut to his waist and walked around the local high school track for 24 hours non-stop, covering a leg cramping 109km (67 miles.) The walk, while humiliating, netted nearly $15,000 and helped finance the filming of ‘Camp Death III in 2D!’ in September of 2014.

Asked about the slight air of desperation that tinged his event, Frame replied: “Oh, that’s was not a slight air, it’s was a thick fog. However, I needed to do all I could to ensure that my golden years are spent eating pudding and yelling at pigeons and not ruing the day I couldn’t be bothered to promote my own movie.”