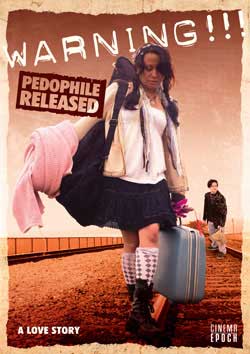 A pedophile is released out of prison from a 6-year sentence after allegedly molesting a 12-year old girl. The victim, now 18, reunites with her assailant whom she calls her “soul mate” only to spark outrage in the community. Not only do they attack the Pedophile, but soon cause more harm and chaos to the girl that they supposedly were protecting.

“Warning” is not your usual cinematic experience. From the get go we watch from a spectator stand as Echo played by Kai Lanette walks the urban surroundings lost, confused, alone and vulnerable. The story is told in pieces that give us more background as the film develops though we initially are tied to Echo as she is raped by several guys and left for dirt, bloody and in pain. Her urge to keep on and try and put the horror behind her is accompanied by slow shots, trick editing and a number of cuts from zooms, perspectives and multi lenses. The editing though contributes nicely to the silent narrative that is only carried by score music. This is the way we are brought into the story.

Flashback sequences reveal that Echo was asked to leave the house at an early age. It also sort of gives us the view of what she’s been up to over the years. The main drive of the film is centered around her old boyfriend who was put away as a pedophile for having underage sex with her. We get the impression that they were in love and that the sentence was the result of Echo not knowing how to handle the accusations at her age of 15.

What I found as the film continued was that the style or drawn out scenery narrative becomes a bit lethargic after a while. The heavy use of cuts, zooms and traveling footage outweighs the film in the sense that you start to wonder if there is a story in place. Dialog is kept pretty minimal and there is only so many times you can follow around Echo to see her change clothes, take showers and steal food before you start to hunger for more of a purpose. It was about 1 hour and 15 minutes already into the film on this basis alone. In the 2nd act of the film we see our opener victim now a street smart prostitute making her way thru the days without any real objective. To instill this notion they pull an odd placement of title graphics calling out “Good girl gone bad” which is more in line with what you might expect Tarantino to do but in a more natural way.

The style of the film continues in this fashion. Which is alot of shaky, voyeur type camera work. My impression was that this was intended to give the narrative a natural feel of the lives of the characters. The Pedophile Malici is eventually released 6 years later to a world that doesn’t care for his type. A flyer circulates that announces that a pedophile has been released and this only adds to his depression. His mother is comforting upon his return but the scars of prison life have been too much for him.

The film isn’t bad, it just is more of an acquired taste. The redundancy will turn off alot of folks who are expecting way more in a shorter amount of time. The editing will please some of motivate fast forward to others. At the writing of this I hadn’t seen director Shane Ryan’s previous work yet, so I started to think that maybe this kind of approach is a trademark approach for him that is evident in earlier films. Some of which are the “Amateur P*rn Star Killer” series. The film fails to really go anywhere besides the voyeur route. The action never picks up and therefore its even hard to put this film into a category. It’s definitely not a horror film or action film with the end result falling into a dry drama presentation. Mixed feelings say that this might be good for the first act but in short Its not something I would ever watch again.