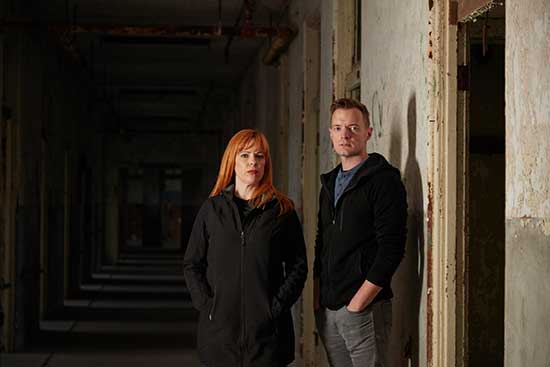 Powerhouse paranormal investigators, Amy Bruni and Adam Berry, know that those who have passed might return, and that is when the true danger begins. In “Kindred Spirits,” premiering its third season on Travel Channel on Thursday, January 24 at 10 p.m. ET/PT, Bruni and Berry enter America’s darkest locations demanding answers to the most chilling, haunted mysteries. Discovering and confronting paranormal activity is just the first step. In each one-hour episode, their ultimate goal is to determine who or what haunts the space and whether it’s safe for the living to remain. Their multi-layered investigations dig into the past in order to identify the dead and analyze the threat. With an arsenal of paranormal tools and their hands-on investigation style, the duo brings peace to those tormented by restless spirits by giving a voice to the dead.

Throughout the 10-episode run, Bruni and Berry’s mission to uncover the truth behind America’s most intense paranormal activity takes them to evil and historic locations, including properties that were used as orphanages and asylums, as well as personal homes inhabited by aggressive entities. Special guests also assist the paranormal duo including psychic medium Chip Coffey and paranormal researcher John Tenney.

“With its broader locations and terrifying tales, the new season of ‘Kindred Spirits’ is right at home on Travel Channel,” said Jane Latman, general manager of Travel Channel. “Amy and Adam have built a strong trust with their fans who can’t get enough of their unique perspective of helping the haunted by reconstructing the faded stories of the dead — their investigations bring peace to the living and give a voice to the afterlife.”