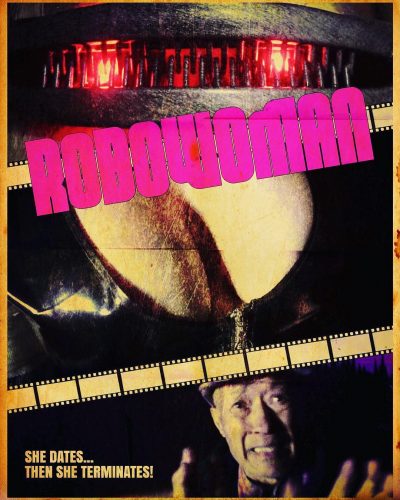 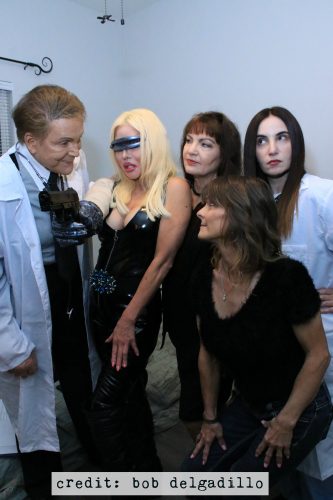 Production recently wrapped in Southern California for the independent Science-Fiction/Revenge/Martial Arts thriller “RoboWoman” and a brand new trailer and some behind-the-scenes Special F/X photos have been released! 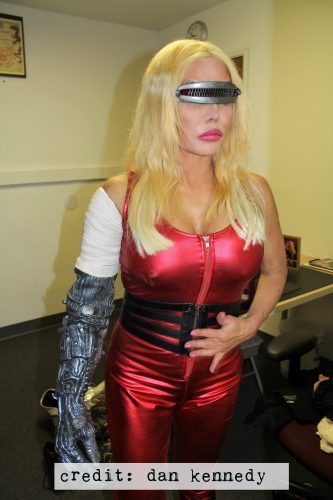 “RoboWoman” follows Vivica Stevens (Dawna Lee Heising, “Blade Runner”, “Nemesis 5”, “Revenge of The Samurai Cop”) on her last night at a temp agency as she accepts a date with a persistent co-worker, played by Jonathan Nation (“Elvis Lives”). Soon she finds herself cornered in a dark park at night and brutally attacked, raped and left for dead by her date and his deranged friends. She’s found barely alive by her roommate, played by Sue Price (“Nemesis 2-5”) and undergoes illegal, experimental “cybernetic” surgery where she is given a replacement robotic arm and visor to correct her vision. However, the cybernetic surgery causes havoc to her brain, as well as to her body. Before long, she decides to seek revenge with the aid of her new attachments. One by bloody one, she stalks and kills her attackers before the shocking and revealing conclusion! 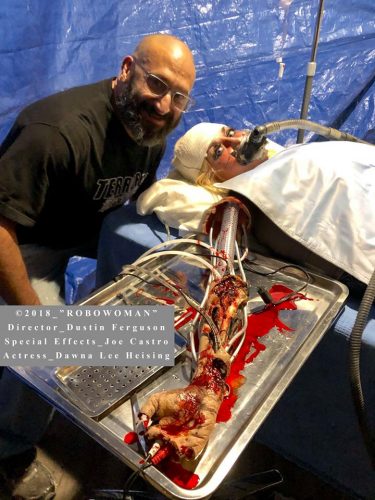 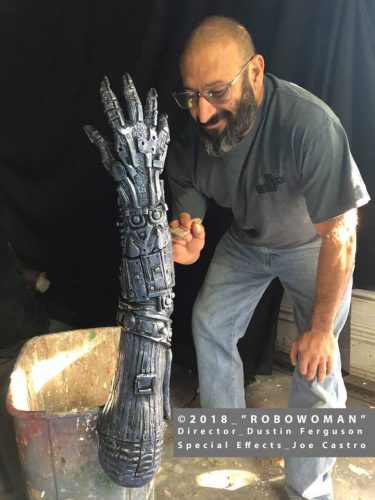 “RoboWoman” is expected to be released in early 2019, but in the meantime you can check out the trailer at: youtu.be/nRupbi4GlEg and grisly behind-the-scenes photos from legendary F/X creator Joe Castro (“Wishmaster 3 & 4”, “Night of The Demons 3”) here in this story. For more information about RoboWoman, please visit: www.imdb.com/title/tt8375936/?ref_=nv_sr_1 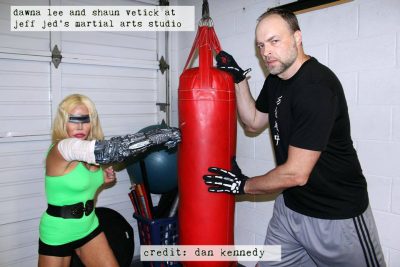 Director Dustin Ferguson is still holding a fundraiser for “RoboWoman” to honor the memory of his late producer Randy Scornavacca, who passed away suddenly in September 2018. Randy had already financed the spectacular Special F/X by the talented Joe Castro, but unfortunately he passed away before he could see his film all the way to completion. He was the sole Producer on the movie, as well as a friend to many people on the team. Randy was a huge part of getting “RoboWoman” off the ground, and it wouldn’t have been possible without his selfless aid. Previously, Randy had financed the majority of “Nemesis 5: The New Model”, which recently had a red carpet awards sweep (“Best Director”, “Best Film – Science Fiction”, “Best Actress” and “Best Actor”) at the 2018 Los Angeles Nollywood Film Festival. Randy attended the film festival and got to see his first film on the big screen. The success of “Nemesis 5” confirmed his faith in the future success of his and Dustin’s next project together, “RoboWoman”. 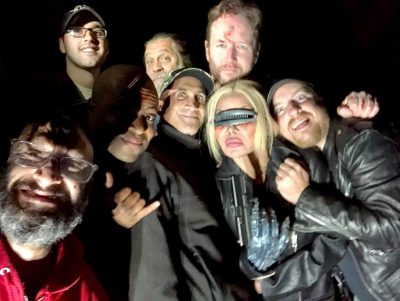 The “RoboWoman” team held a fundraiser to ensure that the film has the best production quality possible to honor Randy’s memory, and the fundraiser is ongoing to raise funds for post-production. Production credits are available for those who are interested in investing and becoming part of the film. Those who contribute $250 will earn a Producer credit on the film and become a part of this very special project! Please visit the “RoboWoman” GoFundMe page at:
www.gofundme.com/quotrobowomanquot-for-randy 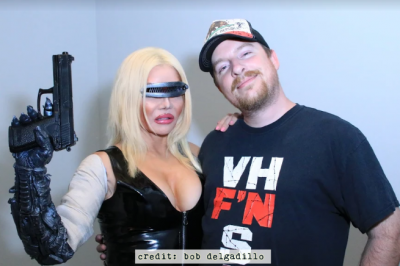 About Dustin Ferguson
Dustin Ferguson is a very prolific and successful multi-award winning filmmaker. After a breakout editing gig in 2009 with “Sleepaway Camp IV: The Survivor”, he has gone on to direct over 50 of his own feature films and more than 70 music videos to date, most notably “Nemesis 5″ and two installments in the low-budget “Camp Blood” series. He’s collaborated with such award-winning music artists as “Egyptian Lover”, “Orgy” and “My Life With The Thrill Kill Kult”, while also previously owning and operating his own retro-themed video rental store called “Old Skool Video”. Dustin is also the editor for Aki Aleong’s “Railroad to Hell: A Chinaman’s Chance”, and is the Director of Photography on the “What an Institution! The Story of Police Academy” documentary, and is the Co-director of the cult classic “Night of the Demons” documentary. Dustin also performs as rapper “Dirty D”, and just released his first CD, titled “California Bitches”.