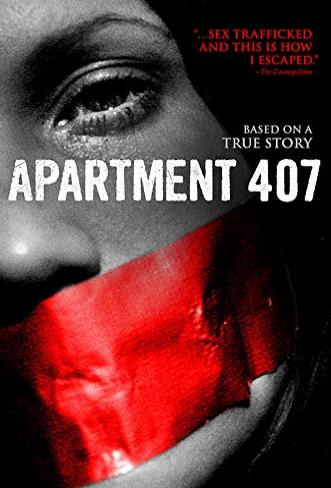 As a victim of sex trafficking who now stars in APARTMENT 407 about her real-life nightmare, we would love to arrange an interview with the star/survivor/producer Frida Farrell who is the creative powerhouse making cinematic history by starring as herself, sharing her real story when she was a model forced into sex trafficking in the award-winning film which has been praised by Variety, Wired, & Cosmopolitan.
Gravitas Ventures releases the film worldwide tomorrow, August 6th, and Frida is available to discuss the cathartic film-making experience and her tireless activism for human rights.

Based on Frida’s own horrific true-life experiences, APARTMENT 407 tells the story of Isobel (played by Frida), a young mother whose life is changed when a charming stranger invites her to take part in a photo shoot. Instead, Isobel is kidnapped and sold into the sex trade, and the film concerns her fight to escape. After remaining silent about her own real-life horrific experience for fourteen years, Frida transformed her pain into art not only for personal catharsis, but also as a powerful statement against gendered violence. The result is a harrowing tale of indomitable tenacity that has received 18 film festival nominations. Featuring the work of master cinematographer Stefan Ciupek (SLUMDOG MILLIONAIRE, 127 HOURS), APARTMENT 407 is a chilling depiction of the hellish realities faced by millions of women and girls around the world daily.
Frida was born and raised in Malmo, Sweden, but left at an early age to pursue a modeling career, which brought her to the international runways of Paris, New York, and Milan. At the age of 21, she resumed her studies at the prestigious Central School of Speech and Drama in London. Following graduation she started her own London-based theatre company at age 24 where she produced plays. In 2006, she moved to Los Angeles to further explore on-camera work and began working extensively in film and television. She started her own film company, Development Hell Pictures, in 2010. Frida is an ardent human rights activist and has used her platform to fight international and online human trafficking.
Share