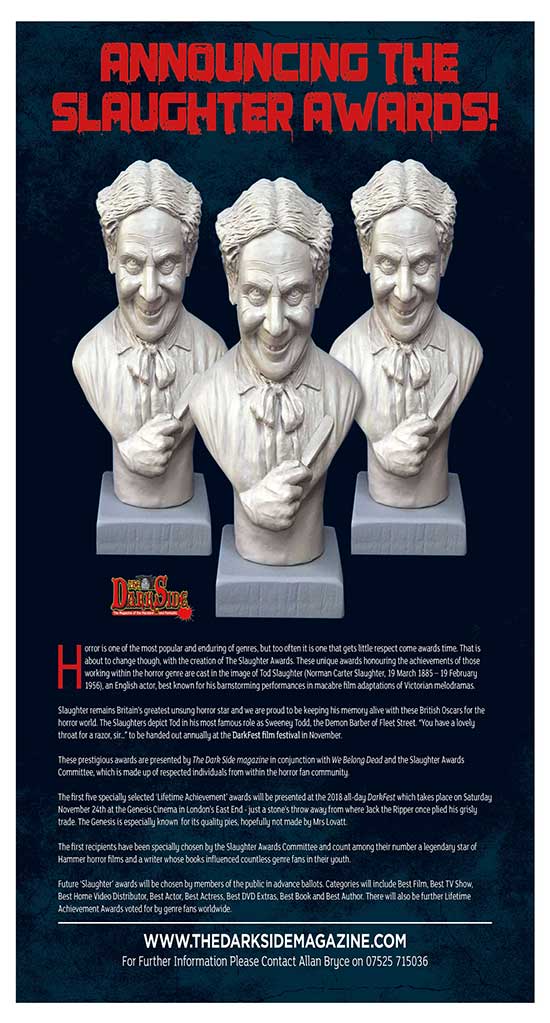 Horror is one of the most popular and enduring of genres, but too often it is one that gets little respect come awards time. That is about to change though, with the creation of The Slaughter Awards. These unique awards honouring the achievements of those working within the horror genre are cast in the image of Tod Slaughter (Norman Carter Slaughter, 19 March 1885 – 19 February 1956), an English actor, best known for his barnstorming performances in macabre film adaptations of Victorian melodramas.

Slaughter remains Britain’s greatest unsung horror star and we are proud to be keeping his memory alive with these British Oscars for the horror world. The Slaughters depict Tod in his most famous role as Sweeney Todd, the Demon Barber of Fleet Street. “You have a lovely throat for a razor, sir…” to be handed out annually at the DarkFest film festival in November.

These prestigious awards are presented by The Dark Side magazine in conjunction with We Belong Dead and the Slaughter Awards Committee, which is made up of respected individuals from within the horror fan community.

The first five specially selected ‘Lifetime Achievement’ awards will be presented at the 2018 all-day DarkFest which takes place on Saturday November 24th at the Genesis Cinema in London’s East End – just a stone’s throw away from where Jack the Ripper once plied his grisly trade. The Genesis is especially known for its quality pies, hopefully not made by Mrs Lovatt.

The first recipients have been specially chosen by the Slaughter Awards Committee and count among their number a legendary star of Hammer horror films and a writer whose books influenced countless genre fans in their youth.