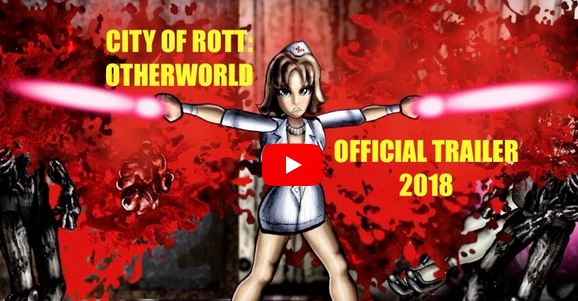 City of Rott: Otherworld, created and directed by F. Sudol and intended for mature audiences due to cartoon blood and gore, is an animated, feature length (92 minutes) horror action movie from BlackArro Productions, and a sequel to the cult classic City of Rott (2006). The first City of Rott was released in August 2006 to Blockbuster Video, Hollywood Video, Movie Gallery, Borders and other stores through Unearthed Films, and also appeared in Fangoria, Rue Morgue and Gore Zone magazine, as well as on major horror websites.

Join Fred, an old man with his deadly, talking Walker, Max, a tough guy eager to slice up zombies with his circular saw, and Sarah, a mysterious Nurse, empowered with the energy of the Otherworld. Hunted by the deadly, unforgiving Stalker Demon and hordes of the living dead, this trio must fight for their very existence if they’re to reach the freedom of the Bridge of Rott in their dangerous quest to escape the city.

Watch the new City of Rott: Otherworld Trailer. A release date for the full movie has not been set.