Home | Festival Favorite “My Brother Is A Zombie” Released Online

Festival Favorite “My Brother Is A Zombie” Released Online 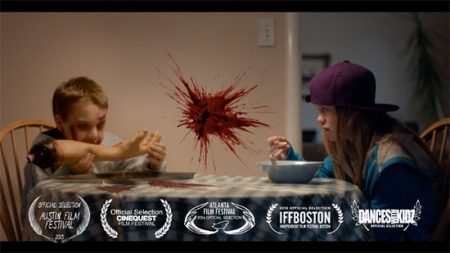 Film festival favorite “My Brother Is A Zombie,” written and directed by filmmaker Russell Yaffe, has been released publicly on Vimeo in the lead up to Halloween. The film has reached a wide range of audiences, screening in midnight short film blocks as well as children’s film festivals. Most recently, Yaffe has been developing educational discussion guides to accompany the film for 4th-5th and 6th-7th grade students that focus on themes of bullying and inclusion. The guides are now available as part of a pilot program by request.

“My Brother Is A Zombie” had its world premiere at the Austin Film Festival on Halloween of 2015 and has since screened at the prestigious Atlanta Film Festival, Cinequest, IFFBoston, and Dances With Kidz, among others, and played in Canada and Colombia as well.

My Brother Is A Zombie from REY on Vimeo.

The zombie dramedy tells the story of Abigail, an eleven-year-old tomboy whose younger brother, Norman, is the most annoying brother in the world – plus, he’s a zombie! When Abigail gets fed up with taking care of him, she makes a decision that could change their relationship forever. The film uses magical realism to explore the complexities of caring for a younger sibling with his own unique set of needs. Abigail, like any kid, makes mistakes before realizing the consequences of her actions, and she learns a valuable lesson from those mistakes. The film is cute, funny, sad, and poignant.

“My Brother Is a Zombie” was shot in Bethesda, MD, the hometown of the film’s writer and director, Russell Yaffe. Yaffe decided to return to his childhood home, where he attended Walter Johnson High School and took filmmaking classes at Imagination Stage, to make a project about kids and sibling relationships.

The filmmaker is excited to share “My Brother Is a Zombie” with the world and to have the film and discussion guides available for educators to use in the classroom.

Tags My Brother Is A Zombie