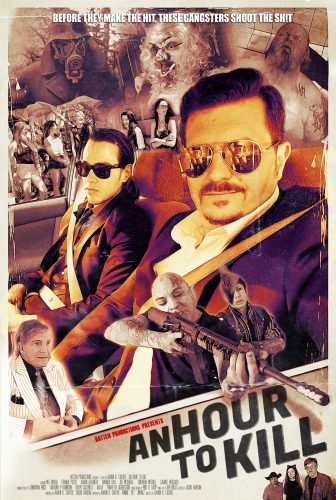 Described as Pulp Fiction meets Creepshow, this film is about two assassins, Gio (Aaron Guerrero) and Frankie (Frankie Pozos), who have an hour to kill (so to speak) before their next hit for their tough as nails mob boss Mr. Kinski (Novak). To help pass the time, they entertain themselves by sharing horror stories to one another. So before they make the hit, these gangsters shoot the shit! With bizarre titles such as “Valkyrie’s Bunker” “Assacre” and “Hog Hunters,” which hit-man’s story will be deemed most disturbing when all is said and done? This film also stars, Amanda Rau (Living Among Us), Joe McQueen (Confessions of a Superhero), Veronica Ricci (Treasure Chest of Horrors II/ Bloody Mary 3D), YouTube star Brendan Mitchell, Gabriel Mercado (Dysmorphia), Luna Meow (Things 4) as well as seduction artists Arash Dibazar and Vince Kelvin.