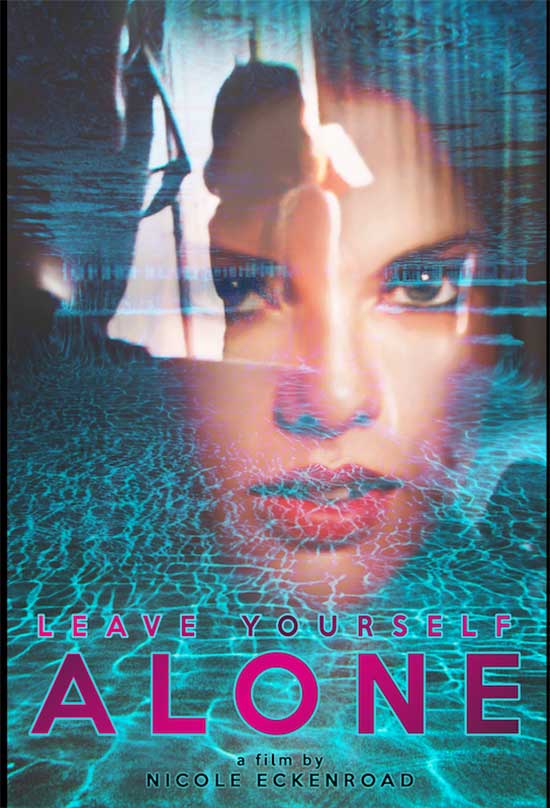 Leave Yourself Alone, a three-time award winning first feature debut by Nicole Eckenroad, comes to Digital HD October 9th. Eckenroad throws herself in the center of her carefully crafted narrative about a young tormented Hollywood actress followed by a pair of documentary filmmakers as she loses control of herself in method acting.
In May 2006 a 19-year-old Hollywood actress moves to Philadelphia to escape her bad reputation and restart her acting career. A pair of documentary filmmakers follows her to an undefined end as she experiments with Meisner technique, taking on the characteristics and behaviors of the characters she plays more often than her own. After losing countless roles to A-list talent, Nicole commits recklessly to a leading role in a story too close to her own and spirals into the abyss of her darkest secret.
Leave Yourself Alone is about performance and identity and depicts the lasting effect of a sexual assault on a young actress as two men film her struggle to land a break-out role. The film points a romantic gaze at a charming, innocent and naive young woman while the men behind the camera challenge the moral boundaries of keeping the camera rolling as she becomes emotionally and psychologically vulnerable. The film’s style convinces the viewer that fiction is fact and makes him consider his part as a voyeur on the victim.
“For me, this story relates very much to my experience and does for almost every
woman I know,” Eckenroad states. “Our identity and behavior are a combination of societal pressures and the inequities and aggressions acted upon us. The film is admittedly rebellious and attempts to flip the experience back onto the aggressor. It manipulates the viewer’s perception to believe they are watching a true story, and you feel guilty watching this young person self-destruct as a result of a trauma that was inflicted upon her.”
Share