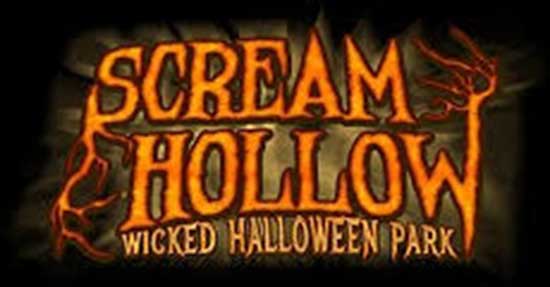 Scream Hollow kicks off a fourth spooky season September 15th through November 2nd, open Friday through Sunday during the month of September, and extended days in October. Nestled among 20-acres of dense forest off Highway 304 in Bastrop, a stone’s throw from Austin, and just miles from the site of the original Texas Chainsaw Massacre, Scream Hollow Wicked Halloween Park is the ultimate Halloween experience.  Scream Hollow, one of the top haunts in the country, offers four separate attractions on site, Mansion of Terror Phantoms, Zombie City: The Factory, Wicked Darkness: The Maze, and the new Slaughterhouse – Virgil’s Last Laff! giving haunted house aficionados the ultimate adrenaline inducing experience across 18 buildings and over one hour of nothing but haunted house action, (for those who can find their way out that is!)

The newest haunt for 2018 is the Slaughterhouse – Virgil’s Last Laff, the blood and gore haunt that will play into your worst nightmares.  Come see why the demented clowns at Scream Hollow are running for their lives and trying to escape the Slaughterhouse! Only one thing scarier than evil clowns…and you’ll have to enter to find out.

Besides blood curdling thrills, Scream Hollow has invited Madame Tinker to set up shop with her Magic Emporium. Inside the Magic Emporium, you’ll find flooring salvaged from the 1890s La Grange Courthouse where dozens of poor souls took their final steps towards the gallows.  Touch at your own risk the 1905 organ used by Paramount studios in several westerns, but then abandoned because accidents kept occurring to those who dared touch the cursed instrument.  And don’t set off the clapping monkey, one of a few remaining 1950s Daishin clapping chimp toys, known to clap on its own, even without the batteries.

Scream Hollow encourages patrons to come out and make a night of it, enjoying a glass of wine or a beer at the Rabid Bat Vampire Bar, a bite to eat at the Cackling Witch Cafe and Bakery, or browsing the oddities and merchandise for sale at Madame Tinker’s Magic Emporium. Families will enjoy visiting the fantastically creepy vendors for some hand crafted Halloween oddities and listening to live music on the weekends. Kids under twelve may indulge in the special activities available nightly. Camping on site is also available.

Scream Hollow is the brainchild of Norm Glenn, who has made it his lifelong passion to scare people, starting as early as high school when he created his very first haunt. Glenn, who ran the popular Mansion of Terror in Round Rock for seven years until 2009, once ran a nonprofit haunted house in Germany while serving in the U.S. Army. From 2000-2002 he put on a haunted house in his Austin front yard, until its success caused too many traffic issues and he decided it was time to open an official site. Glenn spent three years on the current site with a crew of 78 builders, carpenters, set designers, prop designers and lighting and sound technicians. Scream Hollow is a family affair with three generations participating in the running of the park, including Glenn’s son who has created his own creepy Cuddles the clown persona.

“Slaugherhouse is the largest haunted attraction build to date since our inception at Scream Hollow. This 20-ft tall slaughterhouse took a team of over 20 builders four months to complete,” Glenn says.  “As always with Scream Hollow, we spared no details and installed an antique slaughterhouse meat-hook rail system and an entire meat locker freezer that came from an abandoned hospital. Our patrons wanted a little blood and gore, and Virgil’s Last Laff will deliver.“

For more information and to buy tickets, visit www.screamhollow.com/

And stay tuned for a very special Scream Hollow Twisted Christmas coming this December 2018! A Christmas Wonderland by day, a Wicked Christmas by night when Krampus arrives to lead you to the Christmas Haunts and a walk-through Christmas lights maze!