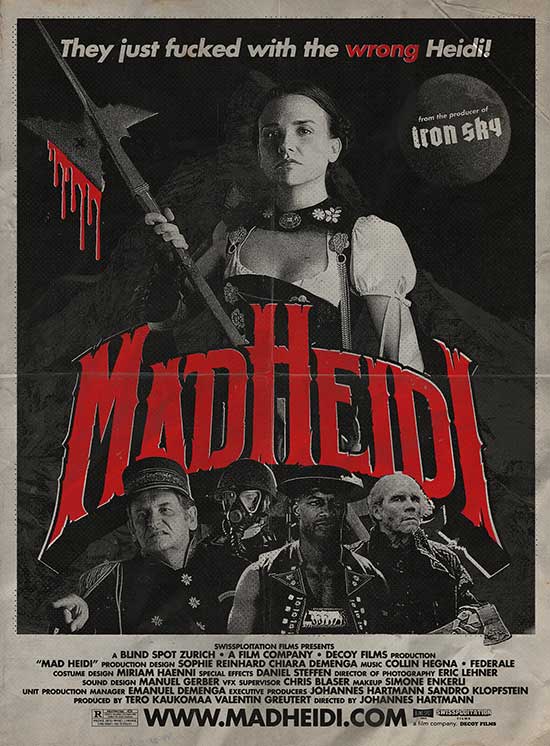 MAD HEIDI is an action adventure horror comedy from debut director Johannes Hartmann from Switzerland. Valentin Greutert from A Film Company and Iron Sky producer Tero Kaukomaa from Blind Spot Zürich are producing and together with Johannes they released a first MAD HEIDI teaser today to start a new era in film production: FANS FIRST.

In the near future the world is sinking into war and chaos, but Switzerland has sealed itself off as an island of the rich and happy. An egocentric heir of a multi-billionaire cheese empire is ruling the country with an iron fist to maintain an artificial postcard-image of Switzerland.When Heidi is abducted by the brutal government troops, she must defend herself and fight her war against the cheese-fueled hatred machinery.

„In Switzerland we have so many clichés, it’s almost unbelievable that nobody has exploited them yet. That’s why the world needs a Swissploitation film! MAD HEIDI becomes a persiflage on the dusty „Heimat“-film genre, whereby we don’t renounce on socially relevant story elements, but clearly put the fun in the foreground. I am convinced that genre fans around the world will love this film“, says director Johannes Hartmann.

Fans First
The production budget of Mad Heidi is 1 Million Swiss Francs (about 1m USD) and it will be produced together with our fanbase. To do this, we are breaking new ground in film production:
1. Via our website madheidi.com Fans can acquire Heidi Bonds and Merchandise to crowd-fund the production of MAD HEIDI in four phases. The first phase, script development, was launched today. We are looking to sell 30’000 Heidi Bonds until November 9. Later will follow the preproduction, shooting and postproduction phases. The shooting is scheduled for Fall 2019.
2. As our fans finance the film, they will also be the first to see it; via special events, online premieres, download or DVD. We therefore need to keep full control of the rights and will only accept further sources of financing if they support this FANS FIRST principle.

“With this (low) budget scale, I believe we can create a new business model for film production. You make your film with the fans, and let them see it first. Everything else will follow as the core audience is there already. This is how tomorrow`s filmmaking and distribution could look like.” explains Tero Kaukomaa, one of the pioneers in crowd engagement in film with IRON SKY.

“MAD HEIDI is diametrically different from what is commonly known about Swiss film: politically incorrect, funny, bloody – and the project is to be produced together with an international fan base. It’s great to work on a film like that, because it breaks new ground not only in content but also the ways of financing and distribution“, says Valentin Greutert, who has been producing films in Switzerland for 15 years.