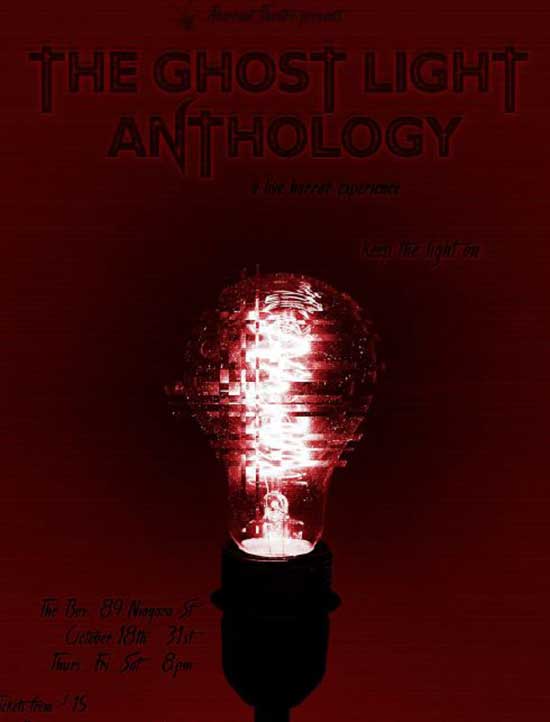 This Fall, Aberrant Theatre will be launching The Ghost Light Anthology – a brand new live horror experience, just in time for Halloween

Aberrant Theatre to Launch “The Ghost Light Anthology” this Halloween Season Toronto, ON – For Immediate Release – Please add to all event listings It’s 2018, and monsters are inescapable – on our screens, in the headlines, and often in our own neighbourhoods.

Toronto based Aberrant Theatre is making the most of that fact to unleash The Ghost Light Anthology – an utterly unique live horror experience, just in time for Halloween. “The world is a scary place right now, and in times like these the horror genre always thrives. When humanity doesn’t know where else to look, we tend to stare into the darkness,” says Aberrant co-founder Andrew Gaunce. “The Ghost Light Anthology gives audiences a whole new window into that abyss, and we’re confident that Toronto audiences won’t be able to look away.” The Ghost Light Anthology is a theatrical collection of five cautionary tales with a focus on modern day monsters. It’s an immersive “haunt” style experience. It’s a summoning ritual.

It’s going to have you checking under the bed, in your closet, and behind the shower curtain. The proceedings will begin at 8:00pm sharp on the following evenings: October 18th, 19th, 20th, 25th, 26th, and 27th, with a closing performance on Halloween night. The event will be held at The Box (89 Niagara Street) – a historic building that operated as a coffin factory as recently the 1970’s. From director Jordi O’Dael: “The atmosphere is the most important part. I want to offer people an experience they can’t get sitting on their couch. Live performances have such a wonderful opportunity to engage people and to disassemble the idea of a ‘captive audience.’ People want to feel something- whether it’s joy, discomfort, sadness, or fear- and it’s our job to let them.”

Ticketing details can be found at ghost-light-anthology-2018.brownpapertickets.com/ , and additional information about Aberrant Theatre can be found at their Facebook page, www.facebook.com/AberrantTheatre/