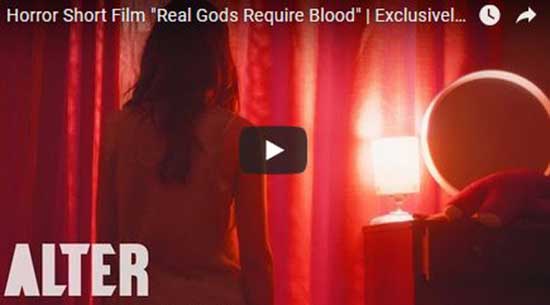 ALTER, a new horror destination, has released the terrifying short “Real Gods Require Blood” exclusively across our platforms today. The film follows a young woman as she volunteers to babysit for her neighbor, not knowing the children regularly receive a nightly visitor from Hell.

“Real Gods Require Blood” was officially selected for a variety of noteworthy festivals in 2017, including FrightFest, Screamfest and Edinburgh International, and was nominated for the Short Film Award at BFI London.

In addition to releasing some of the best horror shorts for an engaged community, ALTER works with and supports up-and-coming filmmakers from across the globe. We are thrilled to work with Moin Hussain, director/producer of “Real Gods Require Blood,” as the official digital distributor for this exceptional short.