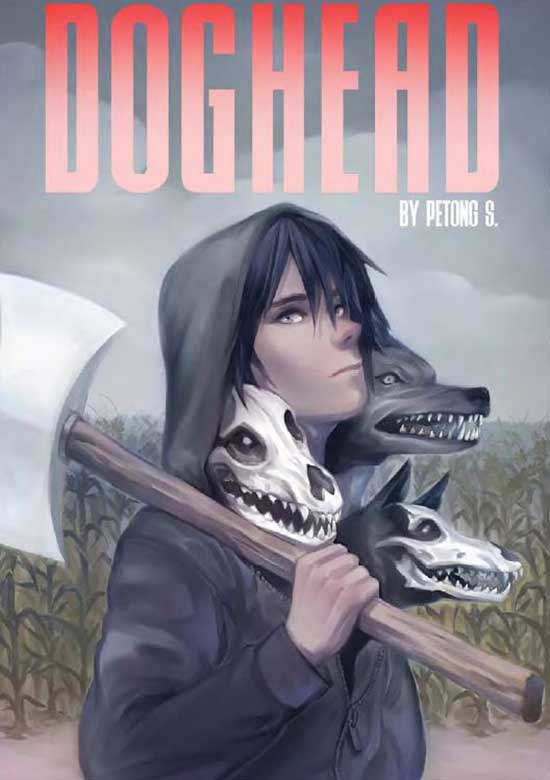 Avery is an alienated youth with few ambitions and even less friends. While trying to get closer to one of his classmates he discovers a hermit just outside of town that has a most sinister secret. While studying the old man from afar he makes the unholiest of pacts. More apt is the ultimatum Avery poses to the old man; Teach Avery the ways of Satanic ritual or suffer the wraith of having all his dirtiest of deeds disclosed.

While I’ve always been highly intrigued with the graphic novel format, Doghead is the very first I’ve explored whether for review or in recreational reading. For those also unfamiliar with graphic novels, sure they’re arguably an unabridged, extended version of a comic book, but there’s so much more beckoning the imagination within the pages. After all, graphic novels seem like such a natural pursuit for fans of horror. There is a whole new, stylistic method of telling a story and its far more challenging than simply presenting some explicit drawings along with dialogue.

The illustrations within Doghead are immensely captivating, daunting and breathe a bone chilling life unto the pages. Digitkame’s execution is mesmerizing. Art work that is worthy of being framed and hung per page adorns the inside. A level of realism and surrealism is enhanced as we cannot deny the Anime influences beyond the pen.

Petong S. effectively conveys what appears to be a relatively simplistic story line. Upon a more detailed glance the execution is spot on as the reading audience absorbs a multilayered plot caulk full of conflict, escalation, character development, exposition and motive. No easy feat considering the narrative box has been alleviated, with the only prose coming directly from the art work and dialogue amongst the characters.

For those unfamiliar with the graphic novel format, some preconceived notions may become prevalent. One may suspect that the plot is predictable or contrived, linear in its direction to inevitability. Rest assured Doghead caters to none of these notions. Within a relative brief time frame we get into the mind, heart and soul of one Avery and what drives him, what motivates him to the core. The protagonist’s intentions are primal and accentuates the plot escalation even further.

The writers create believable characters, each protagonists, antagonists, heroes and villains in a seemingly unbelievable world. Yet as the audience we never really second guess the authenticity of the tale or its plausibility. We live vicariously through Avery and strive to see him succeed. We empathize with his plight and manage to escape our own collective woes, even for a couple hundred pages or so.

The bond between Avery and Blair is endearing and will motivate readers to move rapidly through the images, vying for the interaction to deepen on many levels. The audience will see a little of Avery within him or herself. Everyone has had a secret crush on a friend. A taboo desire that remains unrequited. Deep down we’re all a sucker for an underdog love prevails premise.

The dialogue between not only Avery and Blair but also the lead protagonist and the antagonist reigns true of a current society. Yet somehow the verbal exchange remains timeless. Doghead is the sort of story that would translate just as effectively today as it would twenty years from now. There’s really no over indulgent use of slang that date the storyline. The creators seem to be well aware of this and what works for a universal audience.