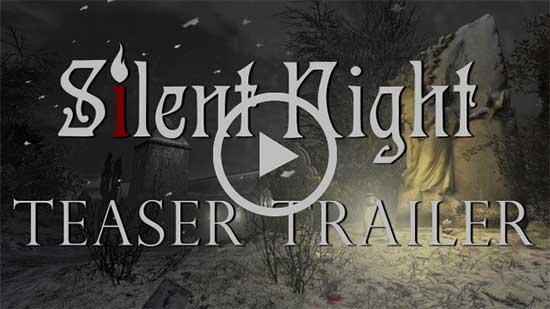 Silent Night – A Ghost Story for Christmas is the first game in the series to be presented in 3D and is due to be released December 2018 for PC.

Silent Night – A Ghost Story for Christmas is a spooky festive tale, set at Northfield Church during an endless Christmas Eve. Beyond the Church, the Carrion Woods await, where the wood-dwellers still haunt the pines and rocky places. Nigel Danvers, ghost-hunter, encounters the spirits that rise when the North Wind doth blow, bringing heavy snow.

Northfield is haunted by the terrible Winter of 1349, when the Black Death swept across the land, killing over two thirds of the population. The plague was silent, invisible and deadly. Everyone was blamed, from witches to wood folk, as the once kind people of Northfield turned on each other. T’was the night before Christmas, and all through the church, plenty was stirring, especially the ghosts. To break the trap and escape, Nigel must make a terrible decision on the loneliest night of the year.

Jonathan Boakes, creator and writer of the Crown franchise:
“I’m very pleased to be moving the Crown games in a new direction. It’s been refreshing to move the ghost-hunting games to full 3D. All the new whizzes and bangs of 3D have given us new vigour, with lots to look forward to. Wrap up warm, the Carrion Woods await.

The main star of the game is Northfield Church, which has been painstakingly recreated inside and out, with full exploration. The church is based on Duloe Church, just up the road from me, here in Cornwall, so it was a nice job to capture both textures and actual photogrammetry of the site.”

Wishlist Silent Night – A Ghost Story for Christmas on Steam now, to be notified when the game releases.