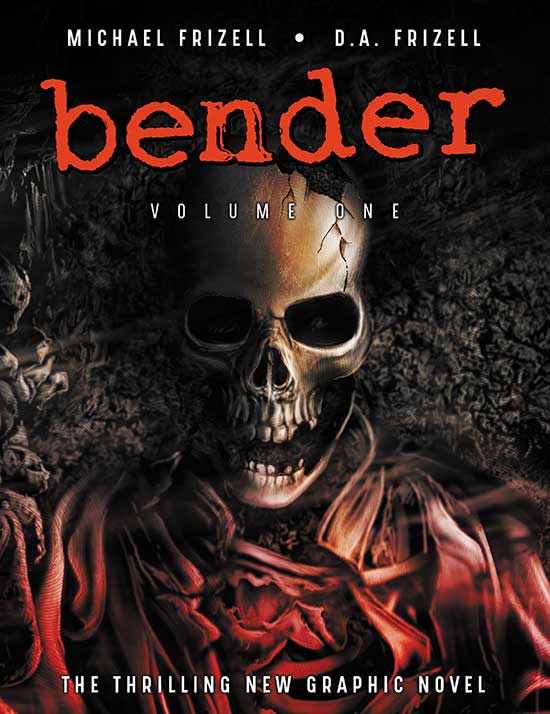 Michael and D.A. Frizell and Oghma Creative Media are proud to announce the release of Bender: The Complete Saga. The 174-page graphic novel explores the true story of a family of serial killers who prey on unwary travelers moving west in the wake of the Civil War.

Outside the sleepy hamlet of Cherryvale, Kansas, the Bender Inn greets weary travelers. Kate Bender, an enchanting, effervescent beauty, is the Inn’s mysterious proprietor. Single men, pockets stuffed with cash, line up to sit with this Venus of the plains and discuss their prospects for finding riches or starting a family. So beguiling is she, they never suspect her to be anything but genuine.

When reports of disappearances along the Osage Trail mount, an investigation leads the U.S. Marshals to Cherryvale and the Bender Inn, only to find the property abandoned and livestock rotting in the field. The Benders have disappeared without a trace, leaving behind a dozen bodies in shallow graves–and parts of many others. Even more disturbing are the satanic runes carved into the slab under what the locals have dubbed “The Devil’s Inn.”

Built upon historical record as well as legend, Bender: The Complete Saga‘s terrifying narrative is as haunting as it is alluring–and may well become the definitive work on the exploits and ultimate fate of the West’s First Family of Murder

Bender is the culmination of the brothers’ love for the medium, the childhood stories two brothers concocted to make rural Kansas a bit more exciting to them, and their desire to tell the stories of real people in extraordinary circumstances. Michael credits his fourth-grade teacher, the late Fern Morrow Wood, author of The Benders: Keepers of the Devil’s Inn, with planting the idea for the graphic novel. “Our family moved from New Jersey to Cherryvale, Kansas in 1977, and I wasn’t adjusting well to the change,” the author said. “Ms. Wood noticed how morose – and bored – I was. She shared that I lived in a town where exciting, and often scary things, happened. She fired my imagination with tales of the Bender clan. I guess her stories stuck with me.”

Wood’s stories about the Bender family also had a lasting effect on David and influenced his art. “Fern Wood often brought me special paper and pencils in order to keep me from drawing all over my homework assignments,” says David. “She would bring me articles cut from magazines about movie special effects and artists like Frank Frazetta to reward me for passing grades on homework assignments.” David is a freelance graphic designer and illustrator, working with bands Avenged Sevenfold, Wednesday 13, and other, but he’s never forgotten Wood’s enthusiasm for her students and the story of the Benders. “Her face would light up when it came to talking about the bloody Benders and I was always fascinated by the story.”

“When Casey Cowan, President and Creative Director at Oghma Creative Media, home to the Skye imprint, first approached me about publishing Bender, he mentioned that he’d like to serialize it first in Saddlebag Dispatches magazine, and I was intrigued,” said author Michael. “When’s the last time you saw a graphic novel serialized in a western-themed magazine? I loved the throwback idea to when comics were dancing on the fringes of culture rather than the homogenized, mainstream stuff we’re seeing produced by some publishers today.”

Bender: The Complete Saga will be released on September 19 in both hardcover and softcover. You can find the book on Amazon, Barnes & Noble, and Books-A-Million’s storefront websites. The hardcover has a suggested retail price of $34.99 and the softcover SRP is $24.99.