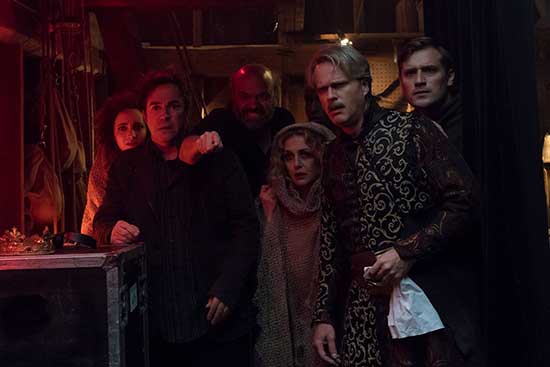 Making its world premiere at the Los Angeles Film Festival this month, check out the first trailer for Ghost Light, the story of an unfortunate Shakespearean acting troupe that unleashes the infamous curse of Macbeth with horrifying results.

Official plot synopsis:
Nothing is more sacred to true Shakespearian actors than “The Scottish Play,” which demands a deep reverence to always be exhibited both onstage and off during a performance. Except the reverence from ennui-engulfed Tom Riley is a bit lacking, to say the least. He’s in love with the beautiful Liz Beth, wife of pompous ham Alex Pankhurst. Liz and Alex are playing—respectively—Lady Macbeth and Macbeth in the small stage production they’re preparing for their local New England theatre. And Liz loves Tom back. Also: Tom wants to play Macbeth. Their underfoot costars make it almost impossible to be alone, until Tom decides that the Scottish Curse so oft mentioned by actors is just baloney. That’s when the witches, ghosts and murder-mayhem really get started and Tom, Liz Beth and everyone else, find themselves trapped in a stage play nightmare, albeit a hilarious one.