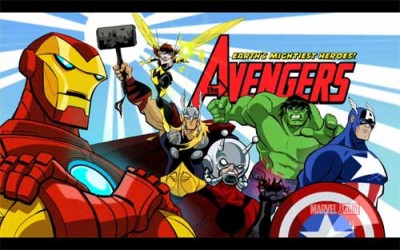 Micro-Episodes to Roll Out on Multiple Platforms

“The Avengers: Earth’s Mightiest Heroes!,” an all-new animated series featuring the best of the best in the Marvel Universe, premieres Wednesday, OCTOBER 20 (8:30 p.m., ET/PT) on Disney XD. Produced by Marvel Animation, the series stars the world’s greatest heroes — Iron Man, Thor, Captain America, The Hulk, Ant-Man/Giant Man and Wasp — who form the Avengers, a team assembled when the powers of a single hero are not enough to save the world.

Beginning Wednesday, September 22, Disney XD, DisneyXD.com/Avengers, Marvel.com, MarvelKids.com and Disney XD Mobile will roll out 20 micro-episodes introducing the team’s core members. Each five-and-half-minute episode focuses on the back story, allies and nemeses of the heroes before the Avengers were formed.

In the two-part series premiere, “The Breakout,” Iron Man, Hulk, Thor, Ant-Man and Wasp have defeated some of the most dangerous Super Villains on the planet. But when the Super Villain prison system mysteriously shuts down, chaos is unleashed on the world. Earth’s Mightiest Heroes must now band together as the Avengers to protect the planet from the threats that no single Super Hero could face alone. Their first task is to try and stop Graviton, a being whose power dwarfs anything ever seen. He’s after Nick Fury, but will destroy the world to get to him. Individually the heroes have no chance, but together they can make a difference.

The complete multiplatform rollout is:

Select micro-episodes will be made available as a free preview on iTunes.

The complete micro-series becomes available on Disney XD on Demand on AT&T, Verizon, Charter and Cox.

The series becomes available on Disney XD on Demand on AT&T, Verizon, Charter and Cox.

Beginning with the “Iron Man” and “The Incredible Hulk” movies in 2008, the release of “The Avengers: Earth’s Mightiest Heroes!” follows Marvel’s overall “Avengers Assemble” strategy, introducing the greatest heroes in the Marvel Universe through various content platforms. This includes the feature films “Iron Man 2” in May of 2010, “Thor” in May of 2011 and “Captain America: The First Avenger” in July of 2011, all building up to “Marvel Studios’ The Avengers” theatrical film in 2012. Disney XD, the single largest distributor of Marvel content around the world, currently showcases approximately 20 hours of Marvel series (including “The Spectacular Spider-Man,” “Fantastic Four” and “Iron Man”) each week.