Better Off Zed Takes a Comedic Bite with New Horror 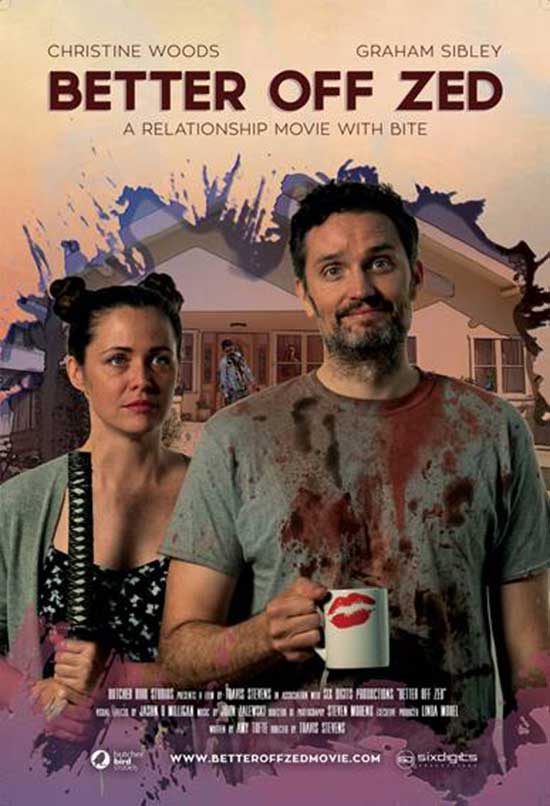 It’s 56 days until Halloween. 162 days until Valentine’s Day.  And 0 days until you can watch the best zombie relationship movie out there – “Better Off Zed.”  Yep, that’s right. “Better Off Zed” is the Zom Rom Com you’ve been waiting for.

If faced with the zombie apocalypse – are you with the right person to confront the end of the world with?  This genre mashup of horror, romance, drama & comedy is bingeworthy now, or as part of an at-home Halloween movie fright fest!

From Butcher Bird Studios & helmed by award-winning director Travis Stevens (Linked; Shelf Life) and with a script penned by 2015 Nicholl Fellowship-winner Amy Tofte, “Better Off Zed” stars Christine Woods (HBO’s Hello Ladies; The Walking Dead; About a Boy) and Graham Sibley (Sully; Jane the Virgin; The Affair). The film is executive produced by Linda Morel (Key & Peele; Heathers, Teachers).  “Better Off Zed” is available through SP Releasing on iTunes, Amazon, DirectTV, GooglePlay, Sony PSN, Walmart and other outlets throughout the US.

For the last decade, Guy (Sibley) has worked a mentally and physically demanding 60-hour week, a soul-crushing daily grind that has frayed his nerves; while his wife Paige (Woods), a free spirit with multiple fine arts degrees to her name, has spent their marriage chasing creative inspiration. When the zombie apocalypse arrives, Guy is ecstatic: no more grueling work, no more monotony, no more hopeless future. He spends his days in idyllic splendor, living life in the moment… while Paige snaps into survival mode and takes on the role of pragmatist, figuring out how to secure their perimeter and stretch out their food supply, while following news reports for any glimmer of hope that they might be able to escape. The couple—in essence—has switched places. And in this new dynamic, all of the small fissures pressured beneath the surface of their relationship finally crack open, forcing them to deal not only with Armageddon, but with a potentially far more horrifying reality… each other.

Better Off Zed – Trailer from Butcher Bird Studios on Vimeo.