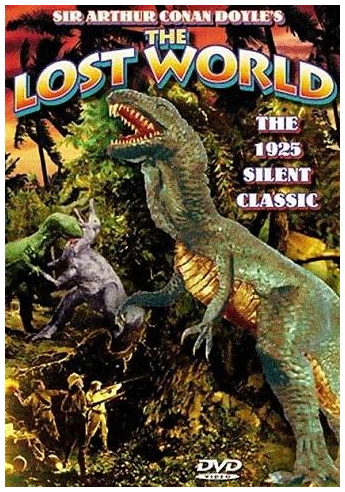 SYNOPSIS:
“Explorer Professor Challenger is taking quite a beating in the London press thanks to his claim that living dinosaurs exist in the far reaches of the Amazon. Newspaper reporter Edward Malone learns that this claim originates from a diary given to him by fellow explorer Maple White’s daughter, Paula. Malone’s paper funds an expedition to rescue Maple White, who has been marooned at the top of a high plateau. Joined by renowned hunter John Roxton, and others, the group goes to South America, where they do indeed find a plateau inhabited by pre-historic creatures, one of which they even manage to bring back to London with them.” (courtesy IMDB)

REVIEW:
Hello, good evening, and welcome! This week I have a true classic of cinema. Stop laughing. I know I’ve said it before, but in this case it’s absolutely true. It must be a classic – it’s silent and in black-and-white – so don’t try to adjust your sets. Like so many silent films, the images may be Public Domain, but the original soundtrack remains copyright-protected so you have two options – either listen to the inappropriate stock music, or supply your own inappropriate soundtrack, such as Inna Godda Da Vida by Iron Butterfly four times over. On second thoughts, that’s never appropriate. Based on a story by Arthur Conan Doyle, starring Wallace Beery, Bessie Love and Bull Montana with groundbreaking special effects by stop-motion maestro Willis O’Brien, I’m actually proud – for once – to discuss one of the most influential monster movies of its era which, admittedly, is not that difficult. Ladies and gentlemen, take a pith helmet and grab your elephant gun as we go in search of…The Lost World (1925)! 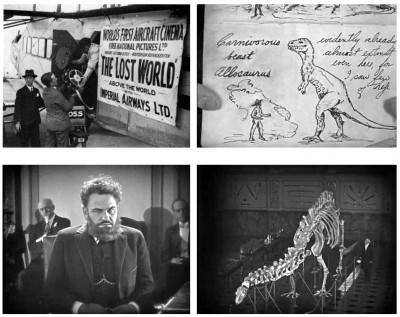 The Lost World was groundbreaking in so many ways. Not only was it screened on a plane as the very first in-flight movie ever, but was also the first film to include paid product placement – the office equipment we see was supplied by the Corona Typewriter Company. Furthermore, it was the first film to cross-promote another film. The Sea Hawk (1924), produced by the same company the previous year, is seen screening at a theatre.

The Lost World was directed by Harry Hoyt, who wrote and directed almost a hundred forgettable films, including The Return Of Boston Blackie (1927), Daredevil Jack (1920), and Clancy Of The Mounted (1933) – I’m not pausing, that’s the name of the film. No, it doesn’t say what Clancy mounted. The point I’m trying to make is, I refuse to show any of his other efforts, which will save you a world of Hoyt (who writes this stuff? Oh, that’s right – me). More interesting was the career of his brother, Arthur Hoyt, who plays Professor Summerlee. Over three decades he appeared in almost three hundred films and, like my good self, survived the transition to talkies, although he was relegated to much smaller roles, often cast as put-upon husbands, exploited workers or nervous politicians, but some of you might remember him as the motel manager who hassles Clark Gable and Claudette Colbert in the Frank Capra comedy It Happened One Night (1934).

The actor who really dominates every scene is Wallace Beery, who plays the bombastic Brian-Blessed-like Professor Challenger. When he was just sixteen years old, Wallace ran away from home and joined Ringling Brothers Circus as an assistant elephant trainer – you know what that means – and left the circus two years later after being attacked by a leopard – wimp. In the early thirties Wallace won awards for his roles in The Big House (1930) and The Champ (1931), and became one of Hollywood’s most popular actors, contracted to be paid exactly one dollar more than any other players at MGM, making him the highest paid actor in the world. He appeared in an unusually large number of nautical titles, including Rugged Water (1925), We’re In The Navy Now (1926), River Of Romance (1929), Way For A Sailor (1930), The Sea Hawk (1924), Slave Ship (1937), Port Of Seven Seas (1938) Thunder Afloat (1939), Barnacle Bill (1941), Salute To The Marines (1943), Barbary Coast Gent (1944), Hell Divers (1931), Tugboat Annie (1933), The Bowery (1933), Treasure Island (1934), China Seas (1935), The Man From Hell’s River (1922), and This Man’s Navy (1945). It’s not surprising really, as fishing was his favourite sport. In fact, Wallace himself once told me that his proudest achievement was catching the largest Black Sea Bass in 1916, a world record that stood for thirty-five years. 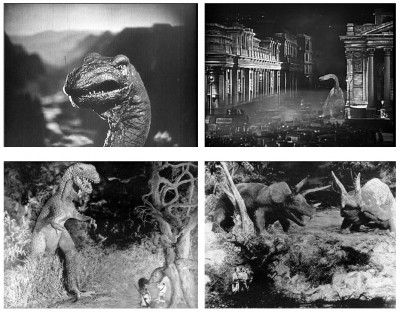 Lloyd Hughes, who plays young Malone, was cast in romantic leads for his good looks, but never seemed terribly comfortable in such roles. He squirmed opposite Mary Pickford, he fidgeted on-set with Madge Bellamy, stammered at Mary Astor in eight films, and cowered from Colleen Moore in five. Despite his neuroses, he made the transition to sound smoothly, and appeared regularly throughout the thirties, notably in John Barrymore’s Moby Dick (1930). 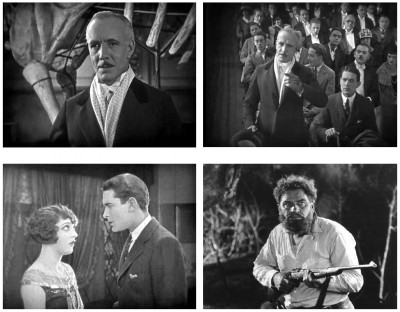 The token female on this expedition is Paula White, played by Bessie Love. The daughter of a Texan cowboy who went to Hollywood to lead the glamorous life of a chiropractor, Bessie was given small roles in both Birth Of A Nation (1915) and Intolerance (1916), and also appeared in several Douglas Fairbanks vehicles, including The Good Bad Man (1916), Reggie Mixes In (1916), and The Mystery Of The Leaping Fish (1916). As her roles got larger, so did her popularity. She danced the Charleston in The King On Main Street (1925), and starred in The Matinee Idol (1928), a rom-com directed by young Frank Capra. She was nominated for Best Actress Oscar for Broadway Melody (1929) and appeared in several other musicals including The Hollywood Revue Of 1929 (1929), Chasing Rainbows (1930), Good News (1930), and They Learned About Women (1930). She made a comeback during the eighties in Ragtime (1981), Reds (1981), Lady Chatterly’s Lover (1981) and her final film, The Hunger (1983) starring Catherine Deneuve and David Bowie. 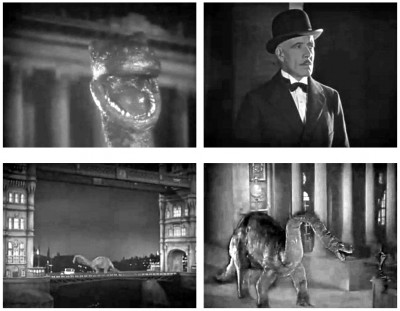 In an excellent example of art imitating life, actor Lewis Stone makes the perfect Lord John Roxton. After serving in the Spanish-American War and World War One, he headed for Hollywood where he was awarded roles that suited his demeanor. He showed up in Nomads Of The North (1920) as a Royal Canadian Mountie, played the title role in The Prisoner Of Zenda (1922), and was nominated for Best Actor Oscar for his role in The Patriot (1928), and continued to work as a man of action until his passing in 1953, suffering a heart attack while chasing some meddling kids off his lawn. While Lewis Stone was typecast in handsome romantic leads, the aesthetically-challenged Bull Montana was typecast as well, but as thugs or henchmen or, like tonight, apemen. Montana was a professional wrestler before becoming a full-time actor in 1917, appearing alongside Douglas Fairbanks and Lon Chaney Senior. He continued playing bit parts into the forties, perhaps most famously as yet another apeman in Flash Gordon (1936).

Animal actors also found lucrative work in The Lost World, earning very high salaries indeed. Calculating the animal’s rent as a yearly salary, the monkey would have earned $14,600, the alligator $14,900, the sloth $15,000, and the python a whopping $36,500. That’s $4,562 and fifty cents per foot! Or would be if snakes had feet. The insects didn’t cost anything, but who knows how much they paid the poor guy who had to go out and wrangle the little buggers?

But there’s little doubt who the real star of tonight’s film is. Willis O’Brien was the first to combine animated dinosaurs and live action so convincingly that when Arthur Conan Doyle showed a test reel to Harry Houdini and The Society Of American Magicians they were baffled. Doyle refused to divulge the film’s origins, and the next day the New York Times ran a front page article about the monsters stating, “If they were fakes, they were masterpieces!” I think I’ve covered everything. Director: Check. Actors: Check. Special effects: Check. I lead such a checkered life! Let’s get back to the film before I say anything I might regret – oops, too late. 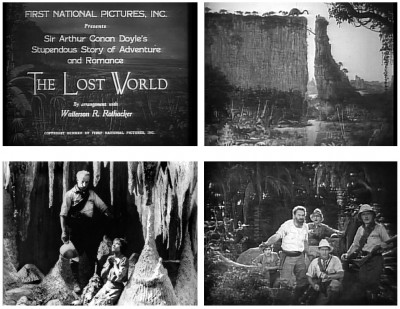 Although I must add, after watching the end of the film, that the brontosaurus looked awfully stiff as he fell into the Thames, presumably because he spent so much time running laps around Piccadilly Square. There’s been a conspiracy of late denying the existence of the Brontosaurus, but as this week’s film proves, they did in fact exist, and they did indeed have outboard motors! The Lost World may not exactly be faithful to Arthur Conan Doyle’s classic novel but, with special effects that were so incredibly innovative, no-one really cared. These effects were central to the film, and Wallace Beery’s inspired performance is just a bonus. I’m allowed one good film per year, and that was it, I hope you enjoyed it. If not, I’ll be back next week to submit for your approval the usual B-grade wannabes for…Horror News! Toodles! 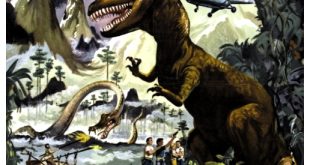