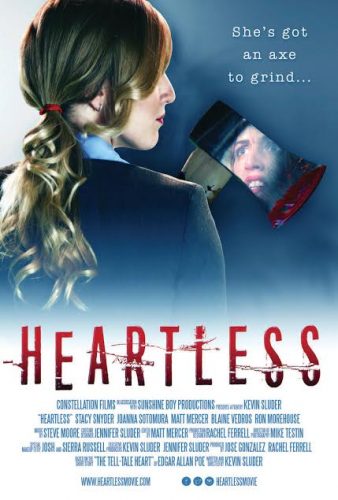 Based on Edgar Allan Poe’s “The Tell-Tale Heart”. An overlooked associate struggles to complete a corporate presentation as a horrific secret gnaws at her conscience.

I’ve never reviewed a short film before so this is going to be interesting! I obviously can’t go in to too much detail like I do in my feature film reviews but I definitely don’t want to do any spoilers.The short film was written and directed by Kevin Sluder. Executive Produced by Kevin and Jennifer Sluder. And stars: Stacy Snyder, Joanna Sotomura, Matt Mercer, Blaine Vedros, and Ron Morehouse.

The story of Heartless is how Corporate Life can make you go a little crazy. Everyone wants to be better than the next person so they can get to the top. In this story it’s also about women and how ruthless they can be (to a pretty big extreme) to get ahead.The film centers around Shelby. She’s not ready for the presentation. Even her co worker Clare points this out to her. And she snaps. The whole film is the board room and flashbacks. 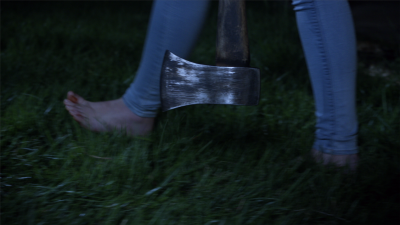 The men in the board room joke at her expense. They remind me of the men in Mad Men. In fact you could say this movie was Mad Men meets The Tell Tale Heart. Not a bad combo. The only thing I wasn’t a fan of was that the guys just stood there when she attacked them one by one. And she attacked them in a glass office where obviously people could see what’s going on and didn’t seem like anyone called the police. In fact one of the guys told another one, “Go Call 9-1-1” and they just stood there. I understand shock but if I saw someone get attacked I know I’d have a little fight or flight. However it worked for the psychology of this film. It’s supposed to mess with your mind. Just like Shelby’s mind is being messed with.

Overall I really enjoyed the film! For a short 12 minute movie I was gripped the whole way through. I wanted to know what was going to happen. And with this kind of film you’re expecting something a little crazy.

If you get to see it at a film festival I urge you to check it out!

Here is a link to their production company:  http://www.sunshineboyproductions.com/ 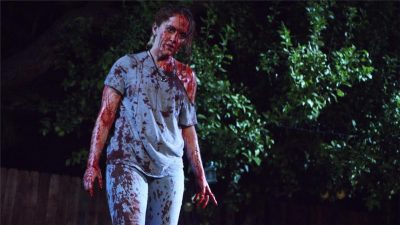