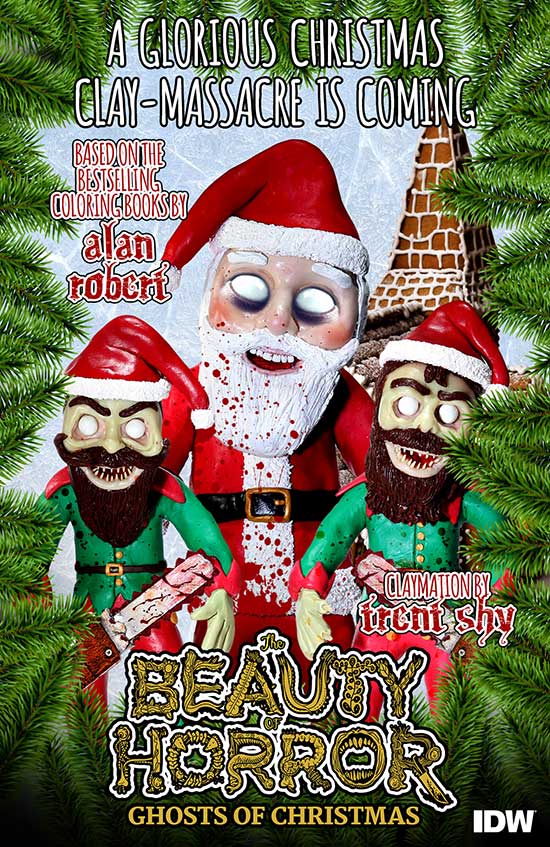 “This will be our goriest film yet, and I’m very excited about that. It’s going to be insane,” says Shy. “I’m doing some things with animation that I’ve never done before and that makes it even more exciting. There will be blood… lot’s of blood.”

Robert adds, “Having grown up as a kid on all the old stop-motion, feel-good holiday specials like Rudolph and Frosty, it’s especially fun for me to be able to sic Ghouliana on those guys with chainsaws and witchcraft. It’s like an ultra-violent R-rated version of A Nightmare Before Christmas.”

Shy is no stranger to horror claymation, with millions of views under his belt for his other films, he says “The biggest challenge with clay animation is the clay itself. I use different types of clay but most of it is “animators” clay, which is very soft, so the characters need constant upkeep while they’re being manipulated. This is why you don’t see clay being used in stop motion anymore. Most stop motion films these days use latex, silicone, and even 3D printing for characters.”

The Beauty of Horror: Claymation Teaser from Alan Robert on Vimeo.

Robert explains, “It’s mind-blowing to see how it’s done behind the scenes. The amount of time it takes to sculpt each character and the attention to detail required to build the sets… it’s just wild. Claymation is truly an art all in itself. I always knew it was painstaking work, but now I have a new found respect for it.”

The Beauty of Horror: Ghosts of Christmas Coloring Book by Alan Robert arrives in stores October 2018 from IDW Publishing.

For more info, head to: www.thebeautyofhorror.com

Tags The Beauty of Horror