Home | Eullenia – the first ever Genre Television Series from Thailand

Eullenia – the first ever Genre Television Series from Thailand 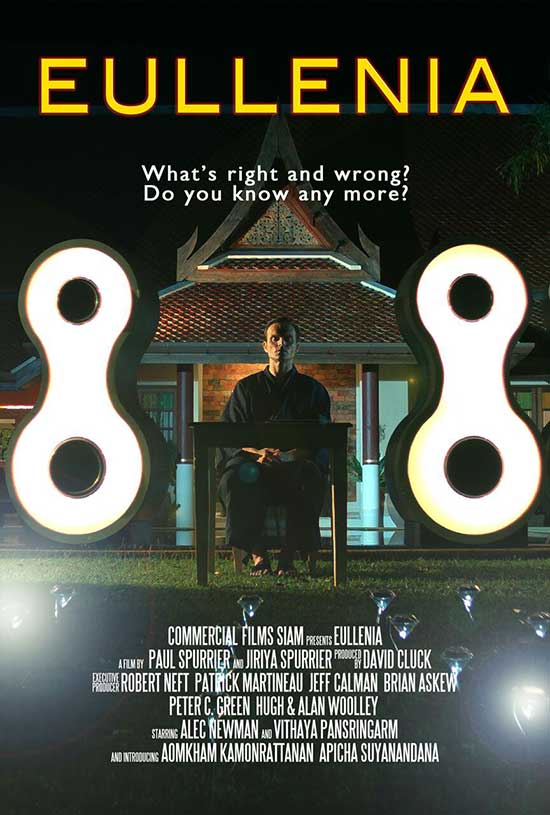 Thailand has produced some notable genre films, amongst them ‘Shutter’, ‘The Eye’, and the ‘Art of the Devil’ series.

British-born director, Paul Spurrier, was attracted by the talents and skills of Thailand’s film industry, and in 2005 made his own contribution to Thai horror genre with ‘P’, a story of possession set in Bangkok’s seedy go-go bars. It marked the first time that a western director had made a film in Thai language. ‘P’ screened at film festivals around the world, and earned international distribution. (It is now available on Netflix worldwide).

In 2016, Spurrier directed ‘The Forest’, which premiered at Cinequest festival in the USA. It was also a ghost story, but this time Spurrier delved more deeply into Thai spiritual belief. Top Thai critic Anchalee Chaiworaporn recognised that ‘The Forest helps create a new cinematic grammar in Thai horror – the technique of silent brutality.’ ‘The Forest’ was released exclusively through Netflix worldwide.

Recognising that some of the best stories now reach audiences on the small screen, Spurrier developed ‘Eullenia’, the story of a wealthy western businessman in Thailand, who uses his power and wealth to feed his darkest desires.

Alec is best known for playing Paul Atreides in the miniseries of ‘Dune’ and ‘Children of Dune’, but has also become a highly respected UK theatre actor. He will shortly be seen starring in the latest series of ‘Strike Back’ for HBO.

Alongside Alec Newman is one of Thailand’s best known talents, Vithaya Pansringarm, who created an iconic figure with his portrayal of the Angel of Death in Nicolas Winding Refn’s ‘Only God Forgives’.

In spite of the fact that ‘Eullenia’ is produced for a television audience, Spurrier insists he did not have to ‘water down’ his story.

“There was a time when television had to be much tamer and safer. But I think there are now premium television channels which are taking risks, which are ready to embrace darker, more complex stories.”

Unlike his previous projects, the horror of ‘Eullenia’ comes from the human world, not the supernatural world.

Spurrier says, “In the past I concentrated on the horrors of the supernatural. But I began to realise that some of the most terrifying acts come from the depths of the human soul.”

In the story of a wealthy figure using his power to exploit women, was Spurrier making a reference to the current #METOO revelations?

“In fact, ‘Eullenia’ was written three years ago, before the current #METOO exposures, but I think it would be wrong to think that this is a problem of just the last few years. Power has always been abused. In ‘Eullenia’ I wanted to talk not only about the exploitation of women, but also exploitation of the poor, of developing countries, and of all those whose voice is stifled by money and power.”

The first episode of ‘Eullenia’ was selected as one of the most innovative new television concepts of the last year and screened at ‘SeriesFest’ in Denver recently. (A feature-length cut also screened last month at BIFAN)

Spurrier admits there was a mixed reaction. Some found the story too disturbing.

“I’m not sure television has ever seen a character as truly dark, disturbing and complex as the character of Marcus Hammond. I think what makes him so scary is that he is not a psychotic monster. Alec Newman brilliantly portrays him as a real person with an uncontrollable addiction to death.”

Are television audiences ready for a series quite as dark as ‘Eullenia’?

“I take horror very seriously. Evil is not a monster with claws and teeth. Evil doesn’t come from beyond the grave. Evil is born in the first moment you inflict pain on someone else, physically or emotionally, and realise it doesn’t bother you that much, and that you might even grow to like it! So much of genre television is safe for the audience because you can switch off and know that it’s only make-believe. The horrors of ‘Eullenia’ are very real. You can’t switch them off. And I don’t know if television audiences are ready for that. The first three episodes are completed, and we hope we can find a network that will be brave enough to get behind ‘Eullenia’ and let us continue the story with the three episodes now in development.”