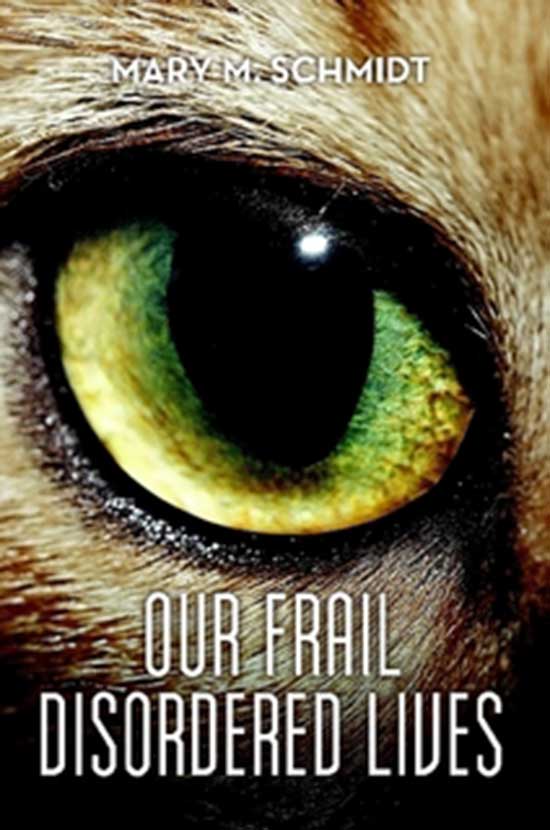 Roach and Scorch are two rival demons vying to acquire as many souls for all of damnation. Yet even the business of condemning seems more jaded and tainted somehow. As the two demons attempt to find their unholy place, a mortal enters the fray that significantly changes the game. Larry Kavanaugh has just sold his eternal soul to one Roach and the game suddenly becomes interesting again. Will the recently procured be enough to redeem Roach’s sense of definition or will the accents of hellfire and brimstone be irreversible? Only Our Frail Disordered Lives can unveil the true destiny.

By far one of the greatest perks of writing for horrornews.net is the opportunity provided to experience the endeavors of authors that I may not have ever had the opportunity to charter otherwise. Some of my most cherished, go to reading odysseys have been delivered via horror news. The works of wordsmith Mary M. Schmidt is certainly among them.

Our Frail Disordered Lives takes a timeless premise and adds a most unique, unusual slant. We get a glimpse into the perspectives of eternity each from the mortals and the minions that serve. A comedic interlude into the history of evil and hell’s history is depicted for levity and intrigue.

Schmidt seems to have a firm grasp on effective character development. In the first act we get to know estranged couple Larry and Kathleen and what makes them tick. We also get into what drives Roach and Scorch and how they approach their individual servitude. Some most compelling plot escalation is unleashed as Dorothy, a religious fanatic is introduced. Chapters alternate back and forth as we learn what motivates her character and how she is affiliated with Kathleen, her sister Grace and Larry.

There is a delicate balance in between perpetual story development and refraining from over indulgent exposition and back story. Small innuendos are highlighted but deters not from the direction of the tale and in fact adds further suspense. As a result, in an undeniable subconscious sense we as the readership become addicted to what happens next, forever tearing through chapter after chapter.

Schmidt’s novel is very compressed and relatively brief. Make no mistake about it a lot transpires within a relative brief two hundred pages. She seems to understand the critical nature of attracting and maintaining and audience’s attention. Our Frail Disordered Lives would make for a most interesting screen adaptation rather through a mini-series or film.

The parallels between mortal living and hell make for an interesting metaphor that unleashes a formidable sense of empathy for each the protagonists and antagonists. It isn’t often we can relate to the villainous characters so readily. Yet it seems to work in this circumstance.

As the final act unfolds the ante is significantly raised as we race towards a climactic end we don’t see coming. I predict a most promising future ahead for one Mary M. Schmidt. I for one cannot wait to delve on in to future endeavors.