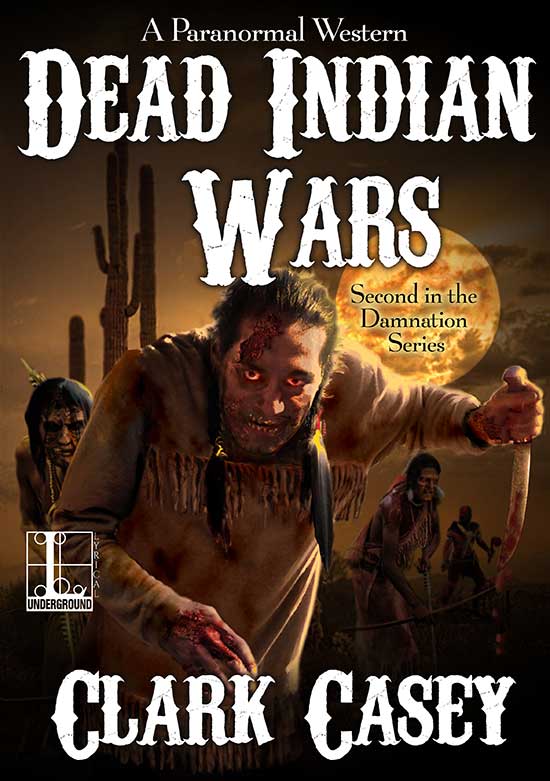 Damnation is a realm not quite hell, certainly not heaven and eerily reminiscent of purgatory. Each the residents arrive with a sense of being disoriented, filled with questions and uncertainty. Many of the new arrivals congregate around the local saloon called The Foggy Dew. When adversity arises one gunshot is all it takes to send the offense straight to hell. The community’s sheriff is a vampire doing his undead best to restore civility in a world gone wrong. With a newly found fresh blood supply lingering around every corner, even Nigel is pushed to the very limits of composure. A rival saloon opens just across the road, called the Rusty Nail which could prove more chaos than comradery. If all this isn’t enough to cope with in Damnation a tribe of angry American Indians have just arrived, and vengeance is their war cry.

I’m most impressed with the infectious prose of one Clark Casey. I was fortunate and privileged enough to read Dead Indian Wars’ predecessor Damnation. The author manages to captivate his readership’s attention early in the paragraphs and keeps the tone steadily escalating. Most noteworthy is the fact Dead Indian Wars works on a number of different levels. Whether you’re familiar with Damnation or not, this edition works as equally effective as a stand-alone story or a compelling sequel, which suffice to say is a rarity within the realm of horror or any other genre.

With an intriguing, captivating plot twist around every corner. Clark manages to break free of the stereotypical mold of sequels. Dead Indian Wars has merit and refuses to exploit the gratuitous nature of sequels we’ve become accustomed to. This author sets a brand-new precedence for the follow up, which each rival authors and readers alike will sit up and take notice.

Of course, there are the keepsake characters such as Nigel, the resident vampire/long arm of the law, Buddy the gunslinging swash buckling drunk, Ms. Parker and Red, just to name a few. We get beyond the layers of their initial character development and find what motivates each. Clark seems to have a firm grasp on his market as we, as the reading audience on a subconscious level continue to empathize and relate to the characters on a personal level. No easy feat for any writer, yet this author pulls it off flawlessly.

Perhaps what is most admirable is the author’s resistance to subscribing to the political correctness wave. Don’t get me wrong I believe each and everyone has the right to be treated as an equal without being predisposed to any form of threatening treatment. Yet one cannot deny that the movement of political correctness is a touch over indulgent. We as a society have gotten so wrapped up in fear of offending someone, even forms of creative expression are censored as a result. Clark boldly takes the leap of creating characters that exude the Native American stereotype; yet executes it with unapologetic ease. Sure, there may be some sensitive readers that are offended with certain references and excerpts, yet my advice to these said readers remains the same. If something upsets you in any form of entertainment the solution is simple. Don’t view it. Chances are the type of readers that would be offended wouldn’t ordinarily gravitate towards horror.

Dead Indian Wars works on so many levels. Perhaps most noteworthy or the subtleties and nuances that contribute to an escalating plot. We get to know our main stake characters a little deeper and introduced to some brand new. The setting is modified if just slightly as Mabel opens her own answer to The Foggy Dew. The Rusty Nail embodies conflict just beyond the threshold. While the first saloon is a creepy version of Cheers, where everyone knows your name, The Rusty Nail evokes a pistol full of fresh conflict. Readers rejoice as the chapters turn into bona fide barn burners.

A creature feature, paranormal, western mish-mash embodies a fresh and innovative premise that could open the flood gates to countless, future exciting volumes. Author Clark Casey appears to have found his niche and I applaud his efforts and encourage him to run with the gambit. Always descriptive. Forever imaginative and captivating, the scenes will linger within the brain with enough impact to rival even the infamous Dogs Playing Poker portrait. 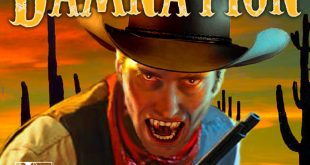