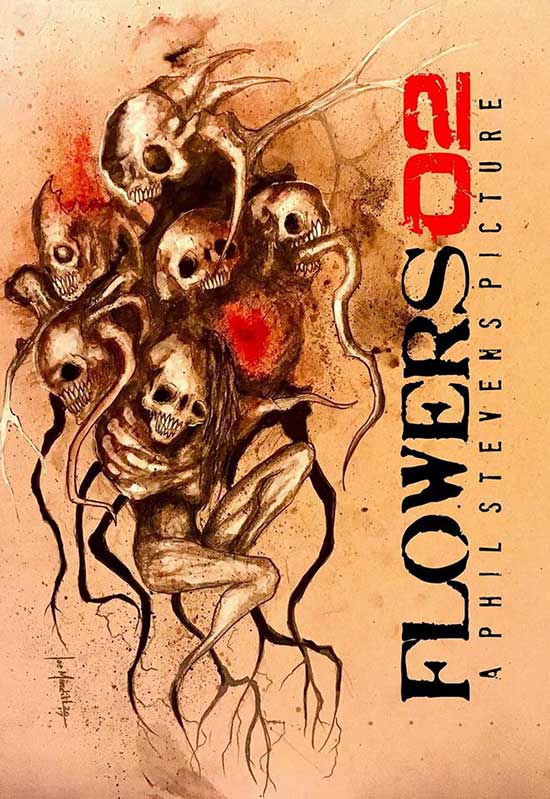 Phil Stevens is in the process of writing a new chapter in horror with his darkly artistic, bloody and upsetting films, telling his nihilistic stories of death and destruction with strong visuals and a distinct lack of dialogue. With Flowers (2015), we have the unique tale of a serial killer as told by his deceased victims. In 2016, Lung II brought us the beginning of that story, a black and white tale of mental deterioration and murder. These are both visually intense, low-budget films that are very different from what we would normally expect out of the horror genre, and this, along with the unique vision that the filmmaker brings, is a big reason that they stand out amongst their peers. Now Stevens wants to finish his story, and he wants to do it right. And to do that, he’s going to need a little help.

“Flowers 02 came about because I’ve always wanted to do a zombie movie, but I felt, since everybody was doing zombie flicks, it was discouraging,” said Phil Stevens, writer/director/creator extraordinaire. “Now that I’m just kinda doing my own thing, I feel like I can take the time to do that dream project.” He describes the upcoming project as a “reverse Night of the Living Dead, where all the zombies (flowers) are inside the house, and all the ghosts and the creatures are all at war with one another… (it) focuses a lot on the Exile, the killer from the first movie…his life and how it kinda fell apart. (From Lung II) you know how he started, and where he ended up in Flowers. Flowers 02 kinda fills in the blanks. And finally, the movie closes out the chapter – how does this all end?” 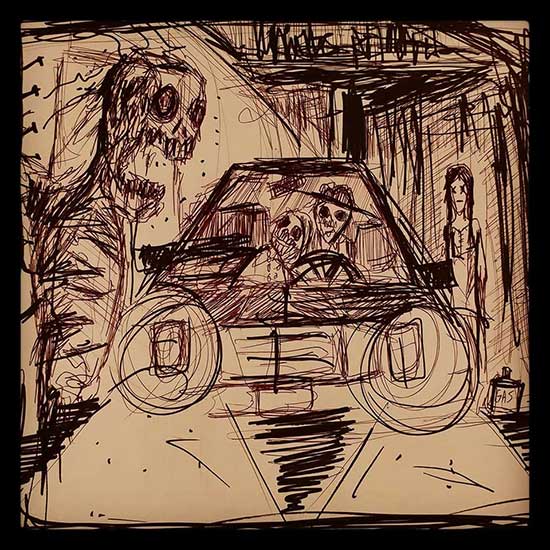 Of course, one of the most important parts of Stevens’ films has been the visual aspect, from the effects to the sets to the creatures that appear throughout. Flowers brought us art direction by Stevens – the house is as much a “character” as any of the actors are – and makeup by Anastasia Blue and Krystle Fitch, two of the “flowers” in the film. Lung II added the art of Joe Meredith (South Mill District) and the effects masterwork of Marcus Koch (you can also find his work in We Are Still Here, 100 Tears, the upcoming American Guinea Pig: Song of Solomon, and so many more). How does Flowers 02 keep up with the previous films? By adding the effects work of James Bell, owner and proprietor of Very Fine Crap Videos. “Phil (is) a cool dude who’s not going to steal your money or make generic garbage. I don’t know if my involvement is hurting or helping the campaign at all, to be honest. I’m kinda like the North Korea of the horror scene.” Those are his words, not mine. But looking at his work on display in his own movies (Nutsack and Tantrum) as well as others’ (Flesh of the Void and The Bizarre Art of Samantha), the addition of Bell can only help make Flowers 02 another memorable experience. “We (Phil Stevens and Ronnie Sortor, his right-hand man, editor, and “brother in cinema”) sat down and said we wanted to make the best,” Phil said, regarding the design of the film and the addition of Bell to the team.

Great effects and great art and a great set design would only mean so much without great actors, and Flowers 02 brings a fantastic cast of both new and familiar faces. Heading up the cast, playing the lead “flower,” is Ember Burns. In just the last couple of years, she’s already written up a great resume: actress, artist, model, filmmaker, and YouTube personality (see more at www.Emberburns.com). “I have done all the love scenes and girlfriend parts,” Ember told me, “but when it comes to being murdered (or doing the murdering) –  that is the role I want. My acting goal is to be a dead body for Law and Order.” If you’ve seen Flowers, you can already tell that Ember is a perfect choice for this film. “When I first saw Flowers, I was blown away…he (Phil) really has a wild mind. I was scrolling thru my Instagram feed and there was a poster promoting the second movie – I never thought there would be a second one. I messaged Phil, who I didn’t even know, and asked about the release date. Somehow, someway, the stars were in my favor, because not only did I get cast (in the film) but I am the lead flower.” 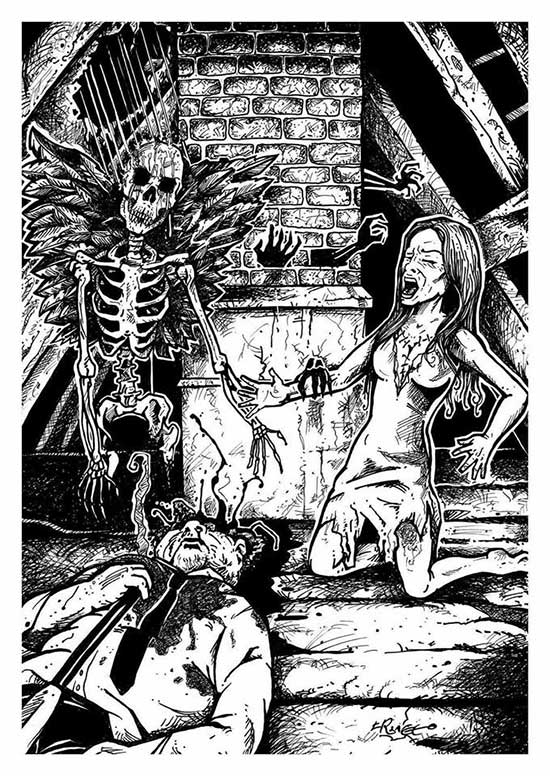 Cidney Meredith, fresh off her role as Luci in South Mill District, will also make an appearance as a “flower” in the trilogy’s finale. “Phil and my husband, Joe Meredith (cover artist for Flowers and Lung II), became friends years ago,” Cidney told me when I asked her how she got involved with Flowers 02. “Over time, our friendship with he and his wife Colette grew. We flew to Philly and stayed with them for a week, which was nothing short of surreal. When he starts talking about film ideas I’m always like, ‘Yes! Let’s do this! How can I help?’ Working on Flowers 02 will give me an opportunity to push myself to levels of acting that I know I’m capable of. (This) will be my first feature film.” Much like Ember, Cidney brings an excitement and eagerness to create something special: “I’ve always been interested in being a part of something small and intimate, but massive at the same time. Underground indie horror gives you the opportunity to create with amazing talent and eccentric people. I’m humbled to work with some of the best women in the underground horror community, all in one big film!”

The cast of Flowers 02 is an impressive one: in addition to Cidney and Ember, there’s also Mae Bell (Nutsack and Tantrum, parts 1 & 2), and Whitney Causey Benson, and Ali Ferda (The Sleeper), and many more. Oh, and let’s not forget, there’s also the lovely and talented queen of heavy metal herself, Jacqueline Dusza. “I’m still in a bit of a state of disbelief that I’ve been invited to work on this project,” she told me, between writing for Kerrang! magazine and working with Nuclear Blast Records. “Independent horror is nothing like what it used to be, but Phil gives me a lot of hope. I’m honored to be involved with such an awesome addition to the Flowers saga!”

An amazing idea. A killer cast. A crew that knows how to get things done and can bring the filmmaker’s vision to life. The only thing left holding Flowers 02 back from being made is money. And that’s where we, the horror community, come in. Phil Stevens has decided to go the crowdfunding route this time around, setting up an Indiegogo campaign to help raise funds for his film. “I went with crowdfunding because I’m crazy enough to believe that it still works… I have some of the greatest fans in the world – I hate calling them my fans, it’s more like family at this point – so it’s just us, 80 of us, and we’re making this movie together. I enjoy bringing people together on projects, and we have a great cast and crew, but we also have really close friends as backers and investors. (It gives) me a better idea of who wants to hang out and make this movie, come to the set and hang out for a day. And that’s what I’m all about… We just want the chance; we want the chance to be able to make the best sequel we can, and if we raise the money to do this, it’ll be worth it for everybody involved.” 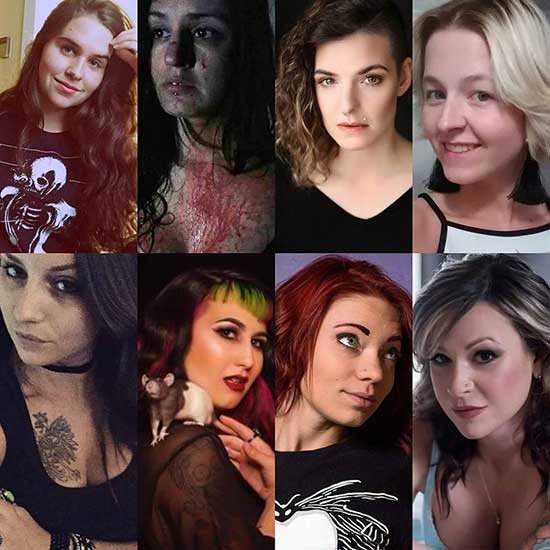 Flowers 02 is one of the more highly anticipated horror films of the next couple years. For more information, or to become a part of the crowdfunding campaign and get some of the amazing, one-of-a-kind perks, please visit the Indiegogo page or Phil Stevens’ website. 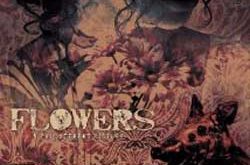