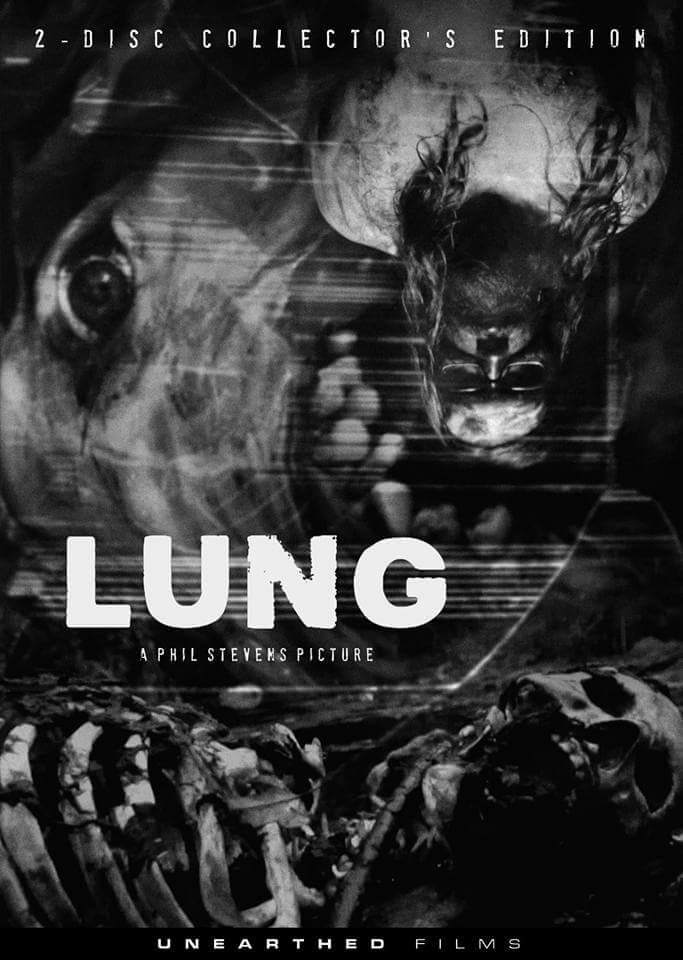 A nameless man wanders the city, littered with necrotic artifacts and a trail of corpses. Are his grotesque hallucinations clues to a violent past? Or are they premonitions?

If you’re familiar with the work of director Phil Stevens, you know he does things a bit differently, which in turn makes his films feel like a different type of experience than the average bloody horror movie. His 2015 film, Flowers, is a prime example, a film that tells the story of a killer who murders a number of women, but from a whole different angle. While the blood and gore and violence are still intact, it can’t be denied that there is also an elevated, artistic feeling that is not usually present in other films of its kind. 2016 saw the release of Lung II, again through Unearthed Films. This time opting for black and white, Stevens again fills the role of writer, director, cinematographer, art director, set decorator, and producer, and also adds special effects (alongside modern day master Marcus Koch) and acting to his list of duties. And this might just be his most twisted story yet. 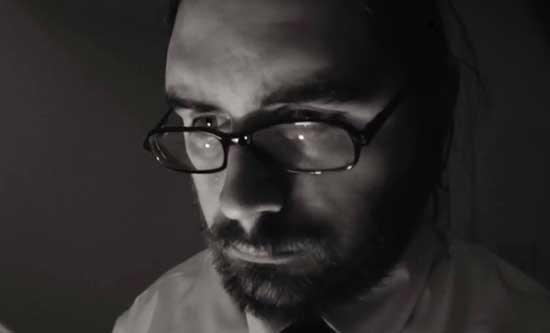 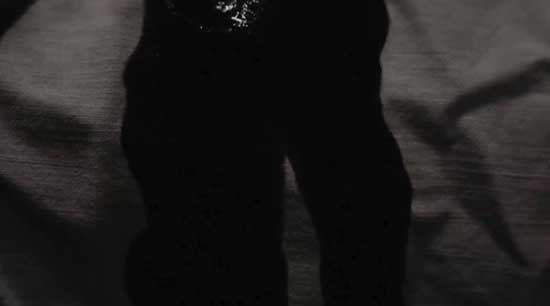 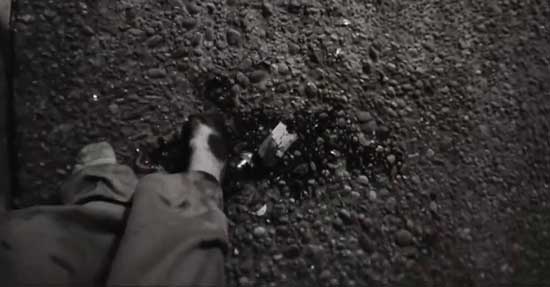 Lung II (which is sometimes also referred to as simply Lung, for reasons which elude me at this time) is by no means a traditional film, and so is hard to discuss and critique by traditional means. Much like in Stevens’ previous work, there is no dialogue here. There is no definitive beginning or end to the story, and so there is no formal resolution of any kind. Instead, this story is told through the actions and interactions of the characters as well as the composition of each set piece and the intricate gory details that correspond to them, all of which include an air of unreliability. It is entirely possible that everything in this story happens exactly as it is shown, and it is equally possible that every bit of this story is misremembered detail after hallucinated, confused detail. We have to throw the rulebook out the window when looking at films like Lung II (or Flowers, for that matter), and look at things from a new angle.

After opening on a room with blood-splattered walls where a man, dressed in shirt and tie, chops up a corpse as if he were a butcher cutting up meat, we find an unnamed man (Phil Stevens) walking near a stream in the woods. He hears a baby crying, and soon sees a guy covered in blood and pushing a stroller, tossing out body parts along the way. Inside that stroller, we see the decaying corpse of a baby, or at least what’s left of it. The unnamed man has recently been in the hospital, judging by how he is dressed, and every now and then our theory is reinforced by quick flashes of a doctor with a slit throat and a nurse, bloody and nude. In fact, we get flashes of multiple murder victims. Are these the man’s memories, and if so, did he kill these people? Or is he also a victim? Or maybe it’s something else entirely. There are clues laid out along the way, but there’s a lot going on here and not all of it makes complete sense the first time. 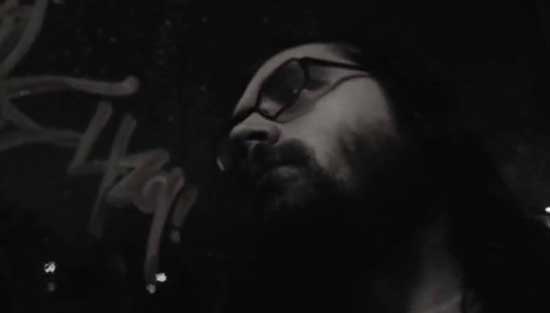 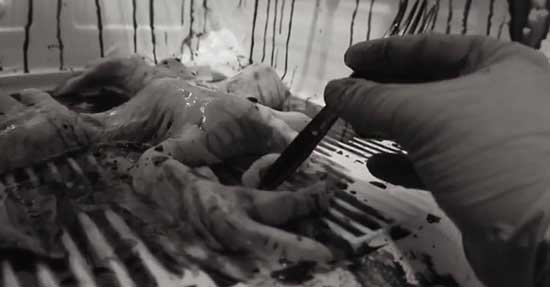 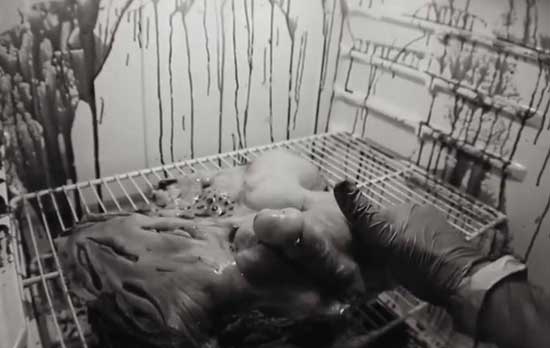 The world created by Stevens and put on display in Lung II is a disturbing one, indeed. There is a dark anger present in these scenes, combined with a nervous feeling of confusion and a sense of being lost in a familiar world. Death and decay surround the unnamed man, both within his physical environment and with regards to his mental state, lingering behind every door and in every crevice. A bloody, rotting body part is not necessarily out of place in a stream or in the fridge, nor does its state of being severed and/or rotting automatically mean it is lifeless. Not surprisingly, much of what we see is not as it seems, and that may (or may not) include the timeline of the story itself. There is never a time in this surreal nightmare that we find a moment of peace, but even at its most brutal and bloody, the film still manages to convey a sense of beauty, at least on the surface. What lies beneath, on the other hand, may be the mind of a madman. 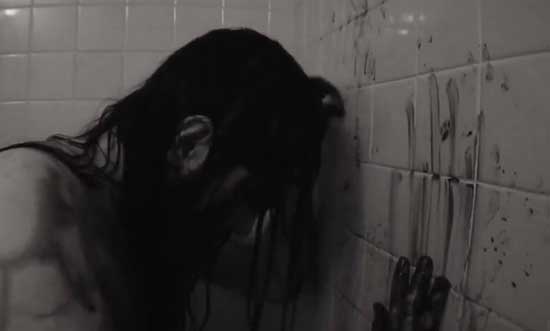 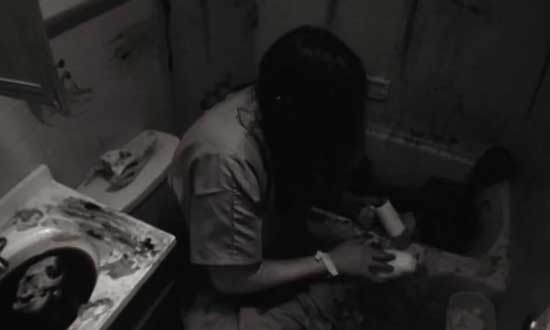 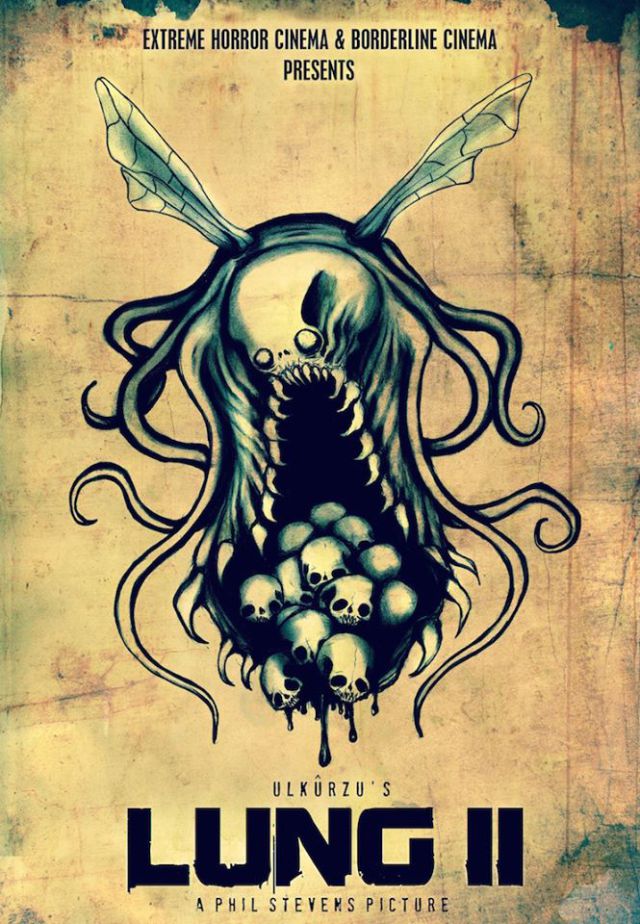 While there are many similarities that can be drawn between Lung II and Flowers, they are very different films (although, one wonders, is there a connection between the two films?). That is to say, Phil Stevens should not be seen as a one-trick filmmaker just because there are common themes that run through his work. Lung II is a dark and dreary spectacle, a claustrophobic nightmare where the audience often feels trapped right alongside the mysterious unnamed protagonist. There is no linear storyline, so the odds are high that this film would not go over so well with a mainstream horror audience – sorry, no tidy, everything’s going to be okay finale here. However, if you’re a horror fan that fancies yourself a bit fancier, and have no problem mixing in with the art crowd, Stevens’ work will probably impress you, and this film will probably earn repeated viewings.