Announcing the full lineup for the sixth annual Cinedelphia Film Festival!  The CFF is programmed in-house by the Philadelphia Mausoleum of Contemporary Art (PhilaMOCA), running April 12-30, and this year centered around the theme of “spirituality, the occult, and outsider thought”.  From a Satanic ritual to a family-friendly monster dance party, this year’s CFF is more wild than ever!
Throughout the film festival the walls of PhilaMOCA will be covered in a selection of hand-painted movie posters from Ghana courtesy of Chicago’s Deadly Prey Gallery.

Thursday, April 12, 7:30 PM (Opening Night)
AN EVENING WITH THE SATANIC TEMPLE – TST founder Lucien Grieves in attendance for a live ritual and presentation followed by a screening of the Mexican cult classic ALUCARDA.

Friday, April 13, 7:00 PM
SUSPIRIA – Actress Jessica Harper in attendance for a screening of a rare, one-of-a-kind 35mm Italian print of the horror classic.  Hosted at the Lightbox Film Center. 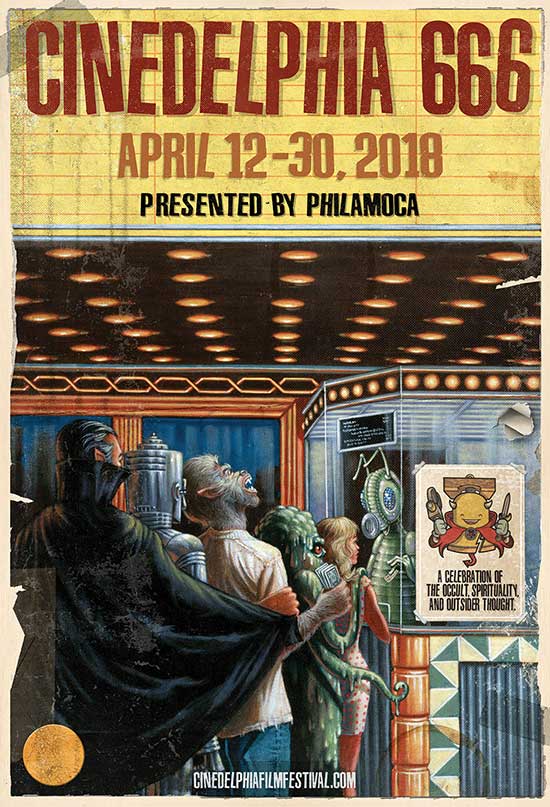 Sunday, April 15, 7:00 PM
I AM NOT A WITCH – Philly Premiere of the Sundance favorite focusing on the modern persecution of witches in Zambia and Ghana.

Monday, April 16, 7:30 PM
THE ALLINS – Philly Premiere; a documentary that traces the life of legendary punk rocker GG Allin as well as the family he left behind.

Wednesday, April 18, 7:00 PM
BEST F(R)IENDS VOLUME ONE – Greg Sestero, co-star of The Room and author of The Disaster Artist, in attendance for his new film co-starring The Room creator Tommy Wiseau.

Friday, April 20, 8:30 PM
My Life With The Thrill Kill Kult – The industrial legends perform their first two albums live in honor of their 30th Anniversary; sold out.

Saturday, April 21, 7:00 PM
BOILED ANGELS: THE TRIAL OF MIKE DIANA – Philly Premiere of the new documentary on the first American artist to be convicted of obscenity.  Subject Mike Diana and legendary filmmaker Frank Henenlotter in attendance!

Thursday, April 26, 7:30 PM
THE RANGER – Pennsylvania Premiere; a group of punk rockers face off with a demented park ranger in this 2018 SXSW hit. Director Jenn Wexler in attendance.

Monday, April 30, 7:30 PM
WALPURGISNACHT – A celebration on the “Night of the Witches” featuring effigy building/burning, a lecture on the history of the pagan holiday, and a screening of The Wicker Man.

The full schedule with details, trailers, and tickets links is available here:
www.cinedelphiafilmfestival.com/2018-schedule/

About:
The Cinedelphia Film Festival is Philadelphia’s alternative celebration of film that pays tribute to everything from locally-shot rarities to video-era oddities.  It is organized in-house by PhilaMOCA Director Eric Bresler.
The Philadelphia Mausoleum of Contemporary Art (PhilaMOCA) is a multi-award-winning art and event space housed in a 100-year-old former showroom for mausoleums.  It was named one of the “21 Reasons Philadelphia is the Coolest City in America” by the Huffington Post and one of the “20 Best Things to do in Philadelphia” by Time Out New York.